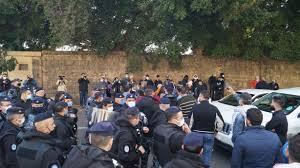 Anti-government protesters on Monday rallied outside the Military Court in Beirut and blocked the road in both directions, demanding the release of detainees held over the recent violent protests in Tripoli.

In a speech at the site, the protesters rejected military trials for “those who rebelled against authorities’ corruption, the difficult living situations and the current collapse,” demanding the immediate release of the detainees.

“Some of them are detained and some had been released,” it added.

The recent demos in Tripoli erupted over dire economic conditions aggravated by a strict Covid-19 lockdown. The protests quickly turned violent and involved the torching of the city’s municipal building and attacks on the main government building, known as the Serail, which according to security forces involved the use of several military-grade hand grenades.