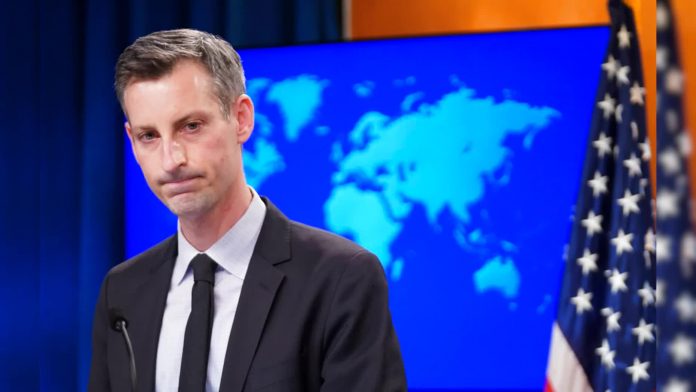 The heated exchange came after the Biden administration on Friday added a layer of sanctions to a Russian vessel and the shipowner for their work Nord Stream 2.

An Associated Press reporter took State Department spokesman Ned Price to task Monday for suggesting that President Joe Biden was responsible for a policy that had started under the Trump administration.

Price, highlighting a report sent to Congress, said some 18 entities have engaged in “good faith efforts” to scale back their involvement in Nord Stream 2, a controversial $11 billion pipeline project designed to transmit Russian natural gas to Germany.

Kremlin critics have said the project would double the amount of natural gas imported from Russia. If completed, it would leave Europe more dependent on Russian energy than ever before. The poisoning of Russian dissident Alexei Navalny has revitalized calls for the project to be abandoned.

At Monday’s press conference, Price seemed to suggest that the Biden administration’s efforts had led to the development on Nord Stream 2. The aforementioned entities have wound down their activities in the pipeline project, Price said, and demonstrated that Biden and Congress’s strategy have been “working to good effect.”

Associated Press reporter Matt Lee piped in, telling Price that all of this work had begun under the Trump administration.

“You guys have only been in office for a month, right? Are you telling me that in the last four weeks these 18 companies all of the sudden decided to say, ‘Oh my God! We better not doing anything with Nord Stream 2,” Lee said. “You guys are taking credit for stuff the previous administration did. Yes or no?”

Price, noticeably flustered, said he was merely speaking on behalf of the State Department – occupied by the same people since before Biden took office.

The heated exchange came after the Biden administration on Friday added a layer of sanctions to a Russian vessel and the shipowner for their work on the pipeline project.

Senior Republican lawmakers criticized the move as inadequate, noting that the administration had not penalized any additional companies or individuals for work on the Nord Stream 2 pipeline. They also said the new sanctions were redundant as they duplicate existing penalties that the Trump administration had imposed on the pipelaying ship Fortuna and its owner KVT-RUS in January.

The sanctions were announced in a report submitted to Congress by the State Department late Friday night, three days after a Feb. 16 deadline for its delivery had passed.