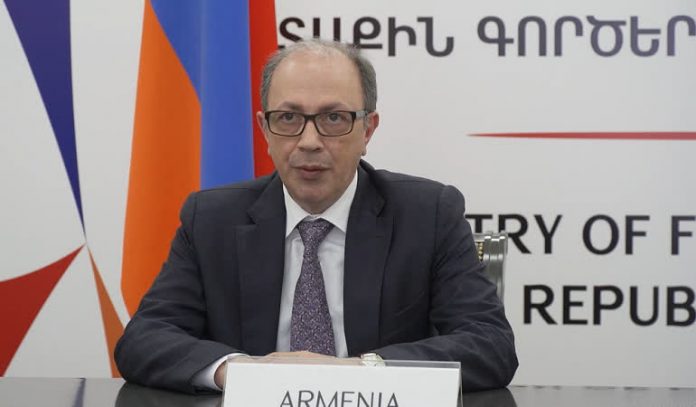 The plea for justice and peace for the people of Artsakh must be urgently addressed, Armenian Foreign Minister Ara Aivazian said at the 46th Session of the United Nations Human Rights Council.

“Azerbaijan not only neglected the call by the Secretary General and consequent Security Council resolution 2532 but exploited and weaponized the global pandemic to launch a full-scale military aggression against the people of Nagorno-Karabakh. The leadership of Azerbaijan did not make a secret that it aimed at erasing all traces of Armenians from Artsakh and with the direct involvement of Turkey and latter’s affiliated foreign terrorist fighters perpetrated mass atrocities against Armenians, the Foreign Minister said.

Thus, he added, the horrors of the unpunished Genocide against Armenians of the last century reoccurred in another forms of mass atrocities in our region under the incitement and complicity of the same perpetrator.

“The use of force to suppress the right to self-determination is a strict violation of the UN Charter, which clearly states that all international disputes must be settled by peaceful means,” Minister Aivazian said.

“It is even more deplorable that the mercenaries and foreign terrorist fighters were widely used in a violent attempt to suppress human rights of Armenians of Artsakh including their right to self-determination, something that was acknowledged by a variety of international actors including special procedures of this august body,” he added.

“Throughout 44 days of the offensive in a flagrant violation of international human rights law and international humanitarian law Azerbaijani army committed horrendous crimes and atrocities deliberately and systematically targeting civilian infrastructures, including schools, hospitals, maternity wards, markets, roads, communication systems and other facilities, as well as vandalizing and destroying the Armenian cultural and religious heritage on the territory of Nagorno-Karabakh, including churches, cross-stones and various monuments,” the Foreign Minister stated.

He noted that “being a significant component of the Armenian identity, the Ghazanchetsots Cathedral in Shushi, Artsakh, was severely damaged after two air raids conducted by the Azerbaijani military.”

He stressed that the execution of Armenian civilians in Hadrut region of Artsakh captured by the Azerbaijani military is one of the most egregious cases of the war against the people of Artsakh, which has already been defined by the UN High Commissioner for Human Rights as a possible war crime.

Unfortunately, he added, the aggression against Nagorno-Karabakh has shown that UN early warning mechanisms didn’t work, which means that we must continue our activity for their further improvement, including within the framework of the HRC review process.

“The UN absence from Nagorno Karabakh has been one of the aggravating factors of the lack of international protection. Armenia is of strong conviction that the humanitarian access to Artsakh should not be subjugated to any political considerations and emphasizes the significance of the universal application and protection of human rights for all people irrespective of the status of the territory where they reside,” the Armenian Foreign Minister said.

“One of the hallmarks of this was that Azerbaijan made extensive use of social media platforms to intimidate the Armenian population. With the endorsement of the high level leadership, the Azerbaijani officials and armed forces share videos on social media platforms, which constitute evidence of degrading, inhuman and cruel treatment of the Armenian POWs and civilian detainees, including their humiliation, physical abuse, mutilations, ISIS style beheadings.​The perpetrators of the war crimes who publicly boast about decapitations of Armenians have been decorated with the high State awards, including national hero titles,” he stated.

“Against this background is highly disturbing the fact that Armenian POWs and hostages remain in Azerbaijani custody, now nearly four months after the signing of the Trilateral ceasefire statement on November 9, 2020. However, Azerbaijan has failed to fulfill the commitment to return all PoWs and civilian detainees and it continues to keep a number of them in captivity,” Ara Aivazian added,

He stressed that the immediate return of the POWs and civilians, including women remains an extremely urgent issue and requires an instant solution.

The Miniter Aivazian expressed gratitude to those countries and organizations that spared no effort both during and post-war period and provided humanitarian aid to Artsakh, as well as input their full diplomatic and political potential.

“The plea for justice and peace for the people of Artsakh must be urgently addressed. The people who fought for their right to live, right to determine their future free of coercion and occupation at this very moment continue to face existential threat in the land of their ancestors,” he concluded.