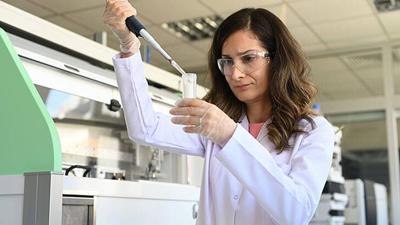 The proportion of women scientists and engineers in Turkey surpassed the EU average in 2019, according to the Eurostat report.

The report said there were around 15.4 million scientists and engineers in the EU in 2019, adding that 59 percent of them were men, while 41 percent were women.

The country with the highest rate of women scientists and engineers in the European continent was Norway with 55 percent, and the lowest rates were recorded in Finland and Luxembourg with 30 and 27 percent, respectively.

The ratio of Turkish women scientists and engineers is higher than in some developed countries of the EU like Germany, France, Netherlands and Italy.

While there are a total of 579,868 engineers in Turkey, only 133,044 of them, a part corresponding to 23 percent, are women, according to the figures of the Union of Chambers of Engineers and Architects in Turkey.

However, there is no data on individuals who are not engineers although they work in the field of science and technology.

The most preferred engineering fields by women were listed as construction, agriculture and food.

Evaluating the findings to daily Milliyet, Selmiye Alkan Gürsel, an academic from Istanbul’s Sabancı University, stated that the number of female students studying in the fields of science, engineering, technology, and mathematics (STEM) at their universities increased by 40 percent in the last five years.

Gürsel also said that the interest of female students in STEM fields at Sabancı University was constantly increasing at both undergraduate and graduate levels.

Elif Nur Fırat Karalar, the first Turkish scientist to have received the European Molecular Biology Organization (EMBO) Young Investigator Award, which is given to young scientists, also proudly explained the progress of women in the field of science.

“As successful women talk about the difficulties they face on the way they walk, the number of young women who take them as examples increases, and they become encouraged,” Karalar said, stressing that women are now demolishing “glass ceilings.”

Hasan Mandal, the chairman of the Scientific and Technological Research Council of Turkey (TÜBİTAK), also pointed out that the rate of women among those supported within the scope of TÜBİTAK’s programs for scientists was 58 percent last year.

“The fact that 793 of 1500 undergraduate students supported within the scope of the Intern Research Fellowship Program are women is another proof that girls aspire to pursue professions in the field of science and technology,” Mandal said.

“We will continue to increase our support to direct and encourage more girls to the field of science and technology,” he added.