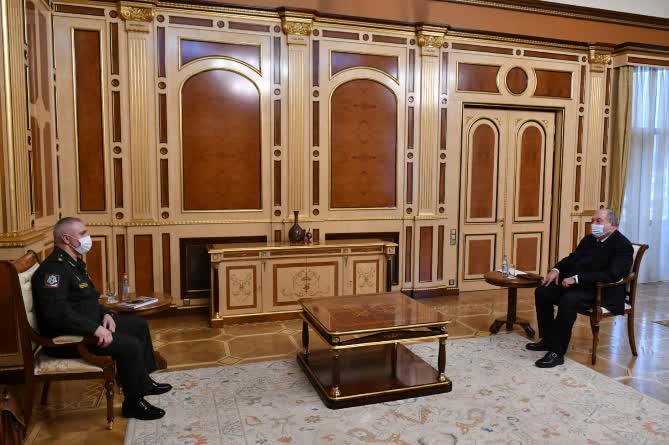 Muradov was said to have briefed the Armenian President on the progress in fulfilling the tasks assigned to the peacekeepers, stressing the warm attitude that the population of Nagorno-Karabakh shows towards the Russian military.

Sarkissian, in turn, highly appreciated the mission of the Russian peacekeepers in Artsakh and wished them success in their service.

The interlocutors discussed issues related to the return of Armenian prisoners of war and civilians held by the Azerbaijani side, the discovery of the missing and their transfer to the Armenian side. Sarkissian stressed that any obstacles to search operations from the Azerbaijani side are unacceptable.

During the discussion, they also discussed the processes of demarcation and delimitation of the Armenian-Azerbaijani border. Sarkissian stressed the importance of protecting the borders of Armenia and especially ensuring the security of border communities.

So far, 64 Armenians, both civilians and soldiers, and 16 Azerbaijanis have been repatriated from both countries as part of exchanges between the two sides.

The Armenian authorities decline demands to disclose the exact number of Armenian prisoners held in Azerbaijan on the grounds that it is a state secret.

However, according to various sources, there are more than 140 names on the Armenian exchange list. The European Court of Human Rights said it has received requests concerning 228 Armenians held in Azerbaijani captivity.

India put on table by EU as ‘backup plan’ for trade; sidelining China only ‘wishful thinking’ Disputes between India and Europe prevail on issues...