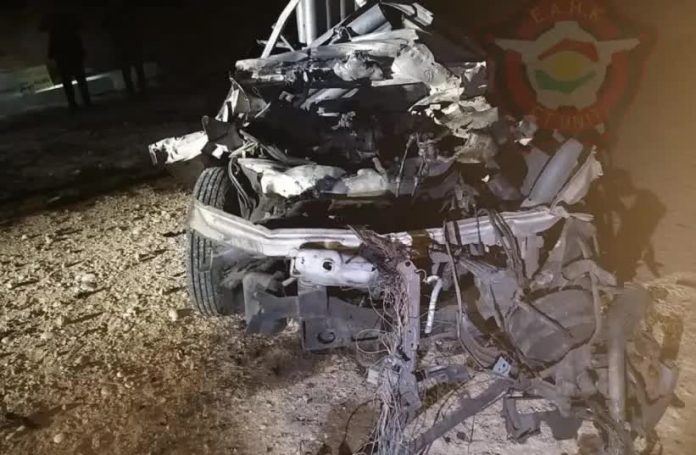 It is a rare direct denial and the first time the Kataib Hezbollah group, one of the Iraqi factions closest to Iran, has commented on the most serious incident this year.

An Iran-aligned Iraqi militia group on Tuesday denied any role in recent rocket attacks against US targets in Iraq, but said an attack against Saudi Arabia last month was justified.

It is a rare direct denial and the first time the Kataib Hezbollah group, one of the Iraqi factions closest to Iran, has commented on the most serious incident this year, a rocket attack in Erbil on Feb. 15 that killed a contractor working with US-led forces.

The attacks over the past 10 days are an escalation against US sites in Iraq at a time when Washington and Tehran are looking for a way to return to the nuclear deal abandoned by former US President Donald Trump.

Kataib Hezbollah, the most high-profile Iran-backed militia in Iraq, does not usually comment on specific attacks.

Its direct denial of actions against US interests while Washington says it is still determining who carried out the Erbil attack is a sign that Iran and its allies wish to avoid an escalation that could bring a tough US response.

Some Western and Iraqi officials say the attacks, often claimed by little-known groups, are being carried out by militants with links to Kataib Hezbollah as a way for Iranian allies to harass US forces without being held accountable.

“We absolutely did not target Erbil or the Green Zone and have no knowledge of the group that did,” Kataib Hezbollah spokesman Mohammed Mohi told Reuters.

In the Feb. 15 attack, rockets hit the US military base housed at Erbil International Airport in the Kurdish-run region killing one non-American contractor. Another salvo struck a base hosting US forces north of Baghdad days later hurting at least one contractor.

Rockets hit Baghdad’s Green Zone on Monday which houses the US embassy and other diplomatic missions.

Mohi, whose group demands a withdrawal of 2,500 US troops stationed in Iraq and opposes Western influence there, said those who carried out the attacks wanted Washington to harden its stance on Iran or target Iraqi militia.

He said a chance must be given for a US-Iranian detente, which could result in US troops leaving the country.

Tensions have been high in Iraq and the wider region since the US killing of Iranian military mastermind Qassem Soleimani and Kataib Hezbollah senior leader Abu Mahdi al-Muhandis in Baghdad in January 2020 sparked fears of a full regional war.

Washington’s Gulf Arab ally Riyadh has been increasingly targeted in the past year, including two aerial assaults in the past weeks.

Mohi did not comment on whether Kataib Hezbollah had any links with the group that claimed the attack, Alwiyat Alwaad Alhaqq.

“We have not claimed it … but we do say that people in the region who have suffered from Saudi (policy) have the right to retaliate,” he said, responding to a question about whether Kataib Hezbollah was involved.