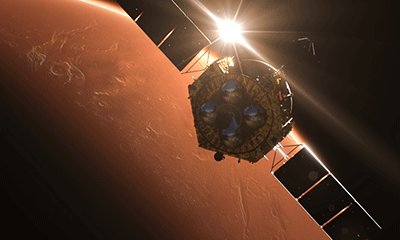 China’s first Mars probe, Tianwen-1, successfully entered the Mars parking orbit at 6:29 am on Wednesday following a third braking maneuver. The probe will operate in the orbit for three months with all payloads onboard the orbiter powered on.

The parking orbit has a closest point of 280 kilometers away from Mars, and the farthest point of 590,000 kilometers, according to a statement China’s National Space Administration (CNSA) provided to the Global Times.

All seven payloads onboard the probe will be powered on to carry out exploration studies during orbiting, which will last for three months, before finally touching down.

Meanwhile, the medium- and high-resolution cameras and spectrometers on the payloads will conduct detailed investigations of the topography and sand-dust weather on the Red Planet, especially those in the preset landing area, in preparation for a smooth landing, CNSA said.

Since its launch on July 23, 2020, Tianwen-1 has flown in orbit for 215 days, taking it some 212 million kilometers from Earth, with all systems in good condition.