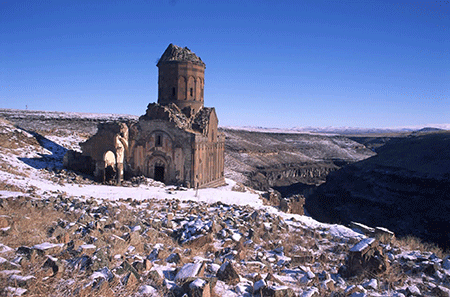 Ani is a ruined medieval city, and the former capital of the Bagratid Armenian kingdom, located in the Eastern Anatolia region of the Kars province in present-day Turkey.

The Bagratid Kingdom, also known as Bagratid Armenia, was founded by Ashot I Bagratuni of the Bagratuni dynasty around AD 880 following centuries of Abbasid rule.

The kingdom emerged as a buffer state between the Byzantine Empire and the Abbasid Caliphate, absorbing several Armenian principalities and the kingdoms of Taron, Vaspurakan, Kars, Khachen and Syunik.

The earliest description of Ani comes from the 5th-6th century Armenian chronicler Ghazar Parpetsi, who gives mention of a hilltop fortress constructed by the Kamsarakan House (one of the Seven Great Houses of Iran closely associated to the Arsacids).

The Kamsarakan ruled over “two princely states” in the historic region of Ayrarat-Arsharunik, but were forced to sell their princedoms (including Ani) to the Bagratids after a failed insurrection they supported against the Abbasids during the 8th century AD.

In AD 961, King Ashot III transferred the Bagratid capital from Katholikos to Ani, ushering in the “Armenian Golden Age”, and the rise of Ani as the chief political, cultural, and economic centre in the South Caucasus.

King Ashot’s own philanthropy led to the sponsorship of large construction projects such as the “Ashotashen” walls and churches, that would later earn him the nickname of “Voghormats” or “the Merciful.”

By the start of the 11th century, Ani had peaked with a population over 100,000 inhabitants, and became known as the “city of forty gates” and the “city of a thousand and one churches”.

This population growth sprawled over the city walls into the surrounding Tsaghkotsadzor canyon, and the Gayledzor and Igadzor valleys. Complex networks of subterranean rock-cut dwellings, churches, dovecotes, and storage rooms were constructed that were still inhabited by goat herders through to the start of the 20th century.

Bagratid rule ended with the death of Hovhannes-Smbat III of Armenia, when in AD 1046 Ani was surrendered during a brief war of succession between the Byzantine Emperor Michael IV the Paphlagonian, and Gagik II King of Ani, resulting in the collapse of the Bagratid dynasty.

Ani’s decline began in AD 1064, when a large Seljuk army commanded by Alp Arslan (the second Sultan of the Seljuk Empire) captured the city after twenty-five days of siege and slaughtered many of its inhabitants.

“Putting the Persian sword to work, they spared no one… One could see there the grief and calamity of every age of humankind. For children were ravished from the embraces of their mothers and mercilessly hurled against rocks, while the mothers drenched them with tears and blood… The city became filled from one end to the other with bodies of the slain and became a road. The army entered the city, massacred its inhabitants, pillaged and burned it, leaving it in ruins and taking prisoner all those who remained alive.”

In the following centuries, Ani would change hands several times between the Shaddadids (a Kurdish Sunni Muslim dynasty who ruled parts of Armenia and Arran) and the Christian Kingdom of Georgia, with a brief period of prosperity under the Zakarids Armenian-Georgian dynasty.

The Mongols unsuccessfully besieged Ani in AD 1226, but in AD 1236 they captured the city, and like the Seljuk’s massacred thousands of its inhabitants. Under the Mongols the Zakarids continued to rule Ani, but as the vassals of the Georgian monarch.

A succession of Turkish dynasties ruled over the city from the 14th century AD until it became part of the Turkish Ottoman Empire in AD 1579. By this time, earthquakes and the successive conquests of Ani had left the city little more than a small town sparsely populated. By AD 1735, the last vestiges of Ani’s populace and monks abandoned the crumbling walls, and the centre of the Armenian Golden Age was left to decay and ruin.