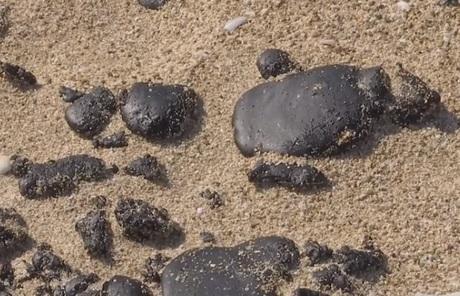 President Michel Aoun has been following up on the reports about the oil spill that has affected Israel’s entire coastline before reaching Lebanon’s shores, the National News Agency said.

The agency added that Aoun has asked caretaker Foreign Minister Charbel Wehbe to follow up on the issue with the U.N. and the international organizations, especially that Lebanon is “still suffering from the effects of the environmental disaster caused by the Israeli bombing of the Jiye depots during the 2006 aggression.”

The president also held phone talks with caretaker Public Works and Transport Minister Michel Najjar, who informed him that he has asked the director of land and maritime transportation at the ministry to “follow up on the issue to take the necessary measures when necessary.”

The disastrous oil spill has blackened most of Israel’s shoreline and deposits of tar have started washing up in the Lebanese south.

The management of the city of Tyre’s coastal nature reserve, one of Lebanon’s last remaining sandy beaches and an important nesting site for endangered Loggerhead and Green sea turtles, said the spill could endanger marine life and biodiversity in the area.

The reserve is one of two marine protected areas in Lebanon and contains a wide diversity of ecosystems and is located on a major bird migration route.

Hassan Hamza, engineer at the Tyre reserve, said teams were evaluating how much tar washed up to organize quick clean ups. He said it appeared that “most Lebanese beaches have been affected by this pollution.”

Israel’s Environmental Protection Ministry has said it is investigating the cause of the oil spill.

The incident is believed to have taken place in early February, and Israel said it received no prior warning before an estimated 1,000 tons of tar started washing up on shore.

On Monday, an Israeli court barred publication of all details of the investigation, including the name of the suspected ship believed to have spilled the oil, its route and ports of call. An Israeli journalists’ association petitioned the court on Tuesday to have the order lifted.