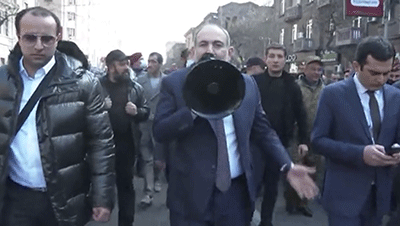 Armenia’s prime minister accused top military officers on Thursday of attempting a coup after they demanded he step down, adding fuel to monthslong protests calling for his resignation following the nation’s conflict with Azerbaijan over the Nagorno-Karabakh region.

“What happened today is that some people tried to put our military staff in a non-democratic process and a military coup,” Nikol Pashinyan to his supporters who had gathered in Yerevan.

“I am sure that whoever signed that document did so by obligation by their chiefs. I’m telling you that your job is to defend Armenia, the army can’t involve themselves in politics.”

However, supporters of Armenia’s opposition also flooded the country’s capital on Thursday to protest Pashinyan.

The demonstrations began immediately after he signed a Nov. 10 peace deal that saw Azerbaijan reclaim control over large parts of Nagorno-Karabakh and surrounding areas that had been held by Armenian forces for more than a quarter-century.

The protests have gathered pace this week, and the feud with his top military commanders has weakened Pashinyan’s position.

The immediate trigger for the standoff was Pashinyan’s decision to oust the first deputy chief of the military’s General Staff, a group of the armed forces’ top commanders.

“Armenia is a democratic country,” said Pashinyan before taking aim at the Army chief.

“I order that Onnik Gasparyan has to resign. I ask the opposition to stop all the protests and let’s talk to get through this.”

The prime minister also denied rumors that he was preparing to flee the country.

Supporters of Pashinyan and the opposition engaged in sporadic scuffles on the streets of Yerevan on Thursday.

Russian President Vladimir Putin’s spokesperson on Thursday said the Kremlin is monitoring developments in Armenia “with concern” as the prime minister accuses top military officers of attempting a coup.

Dmitry Peskov said the Kremlin considers it an “internal affair of Armenia” said the situation should proceed “within constitutional framework”.

“It is unacceptable for soldiers to call for an elected government to resign,” Cavusoglu said during a news conference alongside Hungarian Foreign Minister Peter Szijjarto.