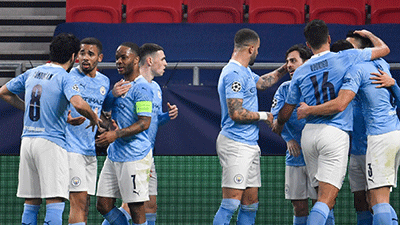 The impressive Joao Cancelo created both goals with deft crosses in each half as the Premier League leaders outclassed their German opponents at Budapest’s Puskas Arena.

The victory in the last-16 first-leg encounter was City’s 19th in succession in all competitions.

It has been a formidable run and manager Pep Guardiola now looks assured of another crack at the quarter-finals – the stage which has proved his side’s undoing in the past three seasons.

Guardiola decided not to start Kevin De Bruyne and Sergio Aguero after their recent fitness issues, naming both on the bench, but such are City’s confidence levels there is no urgent need for either player.

They were comfortable and fluid from the outset in the Hungarian capital, fizzing the ball around and giving the German side little time on the ball.

Silva headed in a delicious cross from Joao Cancelo to open the scoring for City in 29th minute.

And the same two players combined to set up Jesus who doubled the advantage after 65 minutes.

The only frustration may have been the lack of clear-cut chances created, but Monchengladbach rarely looked capable of punishing them.

With the job done, City eased off in the closing stages and Aguero was given a late run-out, entering the fray with 10 minutes remaining for his first appearance since January 3.

Real Madrid struggled to break down an Atalanta side who played 73 minutes with 10 men before winning 1-0 with a goal four minutes from time in their Champions League last-16 first leg in Bergamo.

Remo Freuler was sent off for a foul on Ferland Mendy, which the referee deemed denied a goalscoring opportunity.

And in the 86th minute, the France left-back curled home right-footed from distance to break the hosts’ resistance with his first Champions League goal.