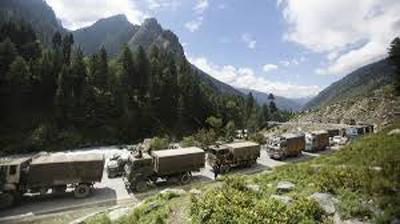 The two countries had been accusing each other of a record number of ceasefire violations since the Narendra Modi government revoked Jammu and Kashmir’s temporary special status in August 2019. However, several surprise statements were made from Pakistan’s establishment earlier this month, indicating thaw in bitterness over the Kashmir dispute.

The Director Generals of Military Operations of India and Pakistan have agreed to completely stop the firing along the border, including the Line of Control, from Thursday. The announcement has been made in a joint statement, which is also a strong indication that no divergence exists over the agreed-upon points between the two armies.

“Both sides have agreed to the strict observance of all agreements, understandings and cease firing along the Line of Control and all other sectors with effect from midnight 24/25 Feb 2021,” read the joint statement, which was issued after the two armies held discussions over the established mechanism of using a hotline contact on Thursday.

The two sides reviewed the situation along the Line of Control and all other sectors in “a free, frank and cordial atmosphere”.

“In the interest of achieving mutually beneficial and sustainable peace along the borders, the two DGsMO agreed to address each other’s core issues and concerns, which have propensity to disturb peace and lead to violence,” the joint statement reads.

The decision comes after Indian and Pakistani troops traded small arms fire and mortars more than 5,000 times during 2020, the worst year in the two decades since the two nuclear-armed nations had agreed for a ceasefire along the Line of Control (LoC) and International Border (IB) in Jammu and Kashmir (J-K) in 2003.

India’s Ministry of Home Affairs told the parliament in first week of this month that 5,133 incidents of ceasefire violations were recorded in 2020 in which twenty-two civilians were killed and seventy-one were injured. Pakistan had also accused India of a record number of firings by the Indian forces along the border.

The decision to strictly abide by the ceasefire agreements comes a day after Pakistan Prime Minister Imran Khan said that “better sense will prevail” and the Kashmir issue will be solved through dialogue.

The dispute over Jammu and Kashmir has been ongoing since 1947. New Delhi claims sovereignty over the entirety of the Jammu and Kashmir region, currently divided by the Line of Control (LoC) between India and Pakistan.

Both sides have reiterated that existing mechanisms of hotline contact and border flag meetings will be utilised to resolve any unforeseen situation or misunderstandings.