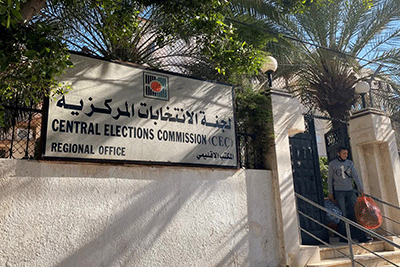 The Israeli security services have no wish to rock the boat, but they have few measures to influence the upcoming polls

From the perspective of the Israeli security establishment, it would have been better if the scheduled Palestinian elections would not take place at all.

Palestinian President Mahmoud Abbas has ordered general elections to be held on 22 May, a presidential one on 31 July and Palestinian National Council polls on 31 August.

About two million Palestinians in the occupied West Bank and East Jerusalem and besieged Gaza Strip are eligible to vote. Israel, which annexed East Jerusalem in 1967 in a move never recognised by the international community, most likely will not allow Jerusalemites to vote.

‘The elections pose for Israel more risks than opportunities’

But Israel also remembers how it was shocked to realise that Hamas had won the last elections for the Palestinian legislature in 2006. Judged to be free and fair by international observers, Hamas defeated Fatah, which had been established by its founding father Yasser Arafat and led since his death by Abbas.

“The elections pose for Israel more risks than opportunities,” says Colonel Michael Milshtein, who headed the Palestinian branch in the research department of Israeli Military Intelligence, known by its Hebrew acronym as Aman.

A year after the elections, Hamas took power in Gaza in a coup following violent clashes with Fatah – and has controlled the coastal enclave ever since.

The general elections are a promising development to enhance the democratic process, increase public trust, create international support for the Palestinian predicament and refresh the stagnated Palestinian politics and its ageing politicians.

These traits were already present in the turbulent years of 2006-2007, which resulted in Hamas’s election victory and domination of Gaza.

“They can be repeated today in the forthcoming elections,” observes Milshtein, who is a fellow at the Institute for Policy and Strategy (IPS) at the Inter-Disciplinary Center (IDC) in Herzliya, north of Tel Aviv.

Thus, Israeli security officials from Military Intelligence and the Shin Bet, who monitor and analyse developments in the occupied West Bank and Gaza, are worried.

According to Israeli security officials, Abbas and his top lieutenants are no less concerned than Israel. They say that Abbas was very reluctant to agree to call the elections.

Abbas’s weakening leadership is challenged by Marwan Barghouti, who is considered the most popular leader among Fatah and Palestinian Authority supporters. So far, all attempts by Abbas to persuade Barghouti to drop his candidacy have failed.

To facilitate Abbas’s aim, Israeli security officials went out of their way to allow the president’s advisers to visit Barghouti in his prison cell, where he is serving multiple life sentences after being convicted of murder by an Israeli court during the Second Intifada.

But, eventually, Abbas succumbed to the pressure, which was mounted on him by the younger generation of Palestinians that hope to see a change of guard, and by Egypt.

Egypt has over the years played a major role in the attempts to bring about a genuine national Palestinian reconciliation between Fatah and Hamas, which has so far failed. Calling the elections is another effort to unify the Palestinian people.

Abbas now faces a dilemma. Without the elections, his attempts to bring national unity and to reinstate Fatah as a significant force in Gaza are doomed to fail. But if the elections take place, Fatah may be defeated again and Hamas would increase its power, not only in its solid base of Gaza but also in the West Bank.

The Israeli security perception is that the elections are a threat.

If Hamas wins the elections, it will increase its self-confidence to challenge Israel more drastically.

Military Intelligence and Shin Bet analysts have already drawn up scenarios arguing that if Hamas emerges as the winner, or only increases its power in the elections, it will employ the same military tactics used in Gaza – launching rockets, planting bombs and using hit and run tactics – against Israeli troops and Jewish settlers in the West Bank.

Israel’s approach is: why rock the boat?

However, there is truly little that Israel can do. It cannot openly oppose the elections, and it knows that it has no real measures to influence them.