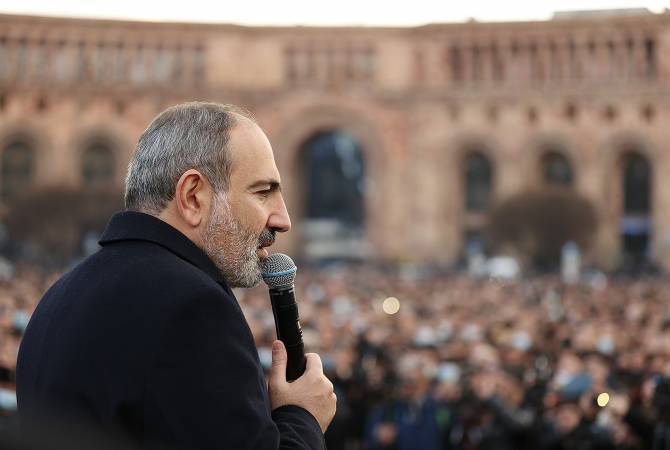 YEREVAN, February 25. /ARKA/. Speaking to his supporters who have rallied in a central Yerevan square, Armenian Prime Minister Nikol Pashinyan said the armed forces- the soldiers, officers and generals- must protect the borders and the territorial integrity of the country.

“As Prime Minister of Armenia elected by the people I order that all soldiers, officers and generals of the armed forces engage in protection of the borders and territorial integrity of Armenia. This is my order and no one can dare to disobey,” he said .

Nikol Pashinyan has fired today the chief of staff of the armed forces Onik Gasparyan after the leadership of Armenia’s armed forces called for his resignation. Later Pashinyan responded by calling on his supporters to rally at downtown Yerevan square.

The military officials’ statement came amid renewed protests against Pashinyan and his government, led by a coalition of opposition parties who also have been calling on Pashinyan step down blaming him for Armenia’s defeat in last year’s war with Azerbaijan over Nagorno-Karabakh.

In a February 23 interview with local television, Pashinyan said that the Iskander missiles launched during the war in Nagorno-Karabakh didn’t explode, or maybe ten percent of them exploded.

Pashinyan’s comments were a response to an interview the week before of ex-president Serzh Sargsyan, who criticized Pashinyan for not using the Iskander missiles until the last days of the war.

The deputy chief of staff, Tiran Khachatryan, was asked in a February 24 interview about Pashinyan’s comments, and reportedly began his response by laughing saying that Pashinyan’s assessment of Iskander’s efficiency was ‘superficial and not serious.” He was fired later the same day.