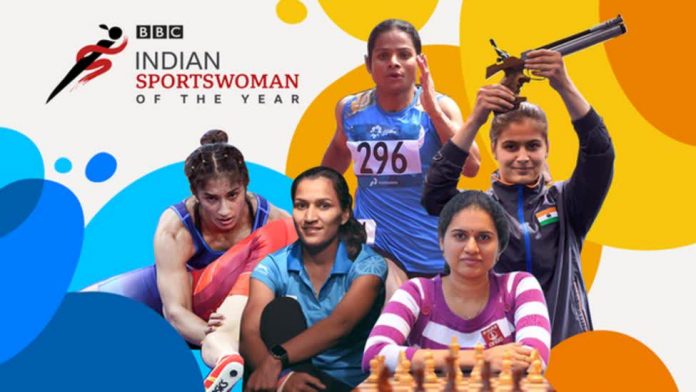 On a cold winter’s morning in the northern Indian city of Lucknow, a group of young girls are warming up on wrestling mats while the beats of ’90s Bollywood blare in the background.

Among them is a famous face: 26-year-old Vinesh Phogat. She smiles and briefly waves towards those of us watching on before her attention quickly refocuses.

The arena is full to the brim, and beyond the music there isn’t a word being spoken. It is a serious scene of concentration but there can be no doubt – something very uplifting is taking place.

A world championships bronze medallist in 2019, Phogat was the first Indian woman to win gold at both the Commonwealth and Asian Games. For many of the young hopefuls out there training today her story is an inspiration, the latest among a growing number. Her background makes her emergence all the more remarkable.

Phogat comes from a small village in Haryana, a northern state with one of the most imbalanced gender ratios in India. In her home state, there are markedly fewer females than males, a phenomenon partly explained by sex-selective abortion.

In the eyes of many among the rural conservative society that formed her, a baby boy is a blessing, a baby girl a burden. Here, societal expectation dictates a dutiful daughter must dress and behave in a certain way as she charts an approved course towards becoming a dedicated wife and mother.

Despite this, Phogat’s upbringing was different. It was her uncle who decided all the family’s daughters should take up wrestling. It attracted opposition and controversy.

Phogat recounts in her local dialect Haryanvi: “All hell broke loose in the village when my uncle starting training us girls in the early 2000s. People called him and us names.

“We sisters had short cropped hair and we would wear shorts in the village and practice.

“Ladies would come up to my mother saying ‘tell your daughter to at least cover her legs’. My mother would also feel ashamed, but we fought back collectively. And the international medals proved everyone wrong.”

Overcoming poverty, patriarchy and other challenges, Phogat is just one of many modern figures showcasing the rising spirit of Indian sportswomen.

She found inspiration at an even younger age than the girls now crowded around her. But back then, even only two decades ago, there were far fewer icons to watch out for.

Phogat was barely six years old when she watched on TV as Karnam Malleswari won India’s first Olympic medal in female competition: a weightlifting bronze at the Sydney Olympics.

The date is still etched in my memory, too: September 19, 2000. It was a watershed moment for women’s sport in India.

Kom, 37, is a six-time world champion and a Commonwealth gold medallist. She hails from a small village in India’s north-eastern state of Manipur where, for most women after marriage, life is restricted to the family home.

She did not hang up her gloves after tying the knot. She was already a mother of three when she became world champion and now with four children to take care of has already qualified for the Tokyo Olympics.

“What I achieved after becoming a mother is something else,” she says.

This kind of remarkable international success flies in the face of a widespread ignorance in attitudes towards sportswomen in some parts of India.

In a BBC survey conducted in 2020, a third of respondents identified one or more sports as being unsuitable for women. These included wrestling, boxing and weightlifting – exactly the disciplines where many Indian sportswomen are shining.

India has won 13 Olympic medals since the Sydney 2000 Olympics and women account for five of them. It is a sign of the country’s changing sporting landscape; the 15 medals won before 2000 were all claimed by men. Had it not been for India’s female athletes at Rio in 2016, the nation would have returned empty handed from the Olympics for the first time since 1992.

Even if some Indians remain entrenched in their conservative points of view, these successes have sparked a chain reaction, with more and more young female athletes and their families now emboldened and inspired to fight back against the barriers that held so many others back.

And interestingly, many of these success stories sprout not just from cities with swanky facilities but from modest small towns and villages, underprivileged places that are sometimes hard to find on Google Maps.

Heptathlete Swapna Burman, 24, is the daughter of a cart puller and a tea plantation worker. Growing up in a small community near India’s border with Bangladesh, her family often didn’t have enough money to make ends meet.

Burman recounts: “When I was young my father had a stroke and became paralysed. I started participating in small athletics competitions, winning a meagre amount in prize money to help support the family.”

Sheer hard work led Burman to gold at the 2018 Asian Games. She says this achievement is even more special considering she has six toes on each foot and struggled to find proper shoes to meet her special requirements.

Divya Kakran, 22, is another example.

Hailing from a small village in the northern state of Uttar Pradesh, she and her brother were keen on wrestling, but her family were so poor they could barely afford even a glass of milk for the children.

Kakran’s father Suraj Sain says: “We had a tough choice to make. With meagre earnings, I could either train my daughter to be a wrestler or my son. My wife was initially opposed to the idea of Divya getting into wrestling. But I knew my daughter. She had the passion and better skills to excel. My son willingly made the sacrifice and we put our resources on Divya.”

She says: “When I started beating the boys, suddenly everyone took notice. I started winning amounts like £30 in a tournament. I had never seen so much money in my life.

“I never looked back, and I won bronze at the Commonwealth Games in 2018.”

Indian sportswomen have not only won medals but triumphed in breaking many persistent gender stereotypes along the way. These athletes are clear in their vision, determined, passionate, hungry for success and the kind of opportunities that were long denied them.

Much progress has been made since the days when it was only Indian male athletes who shone on the biggest international stages while their female counterparts were almost entirely absent.

One of the very first to break through was PT Usha – and she is now playing a key role in inspiring the next generation.

Legendary sprinter Usha became the first Indian female athlete to reach an Olympic final, in the 400m hurdles in Los Angeles in 1984.

Usha was called the ‘Payyoli Express’, a tribute to her village in Kerala. She was perhaps the first true female sports icon for India. Her Olympic adventure helped give other young women the belief that they could do it too.

Today, she runs her own academy with the dream of producing future Olympians.

“Women can do wonders,” she says.

“I think if I can do it in the 1980s, if I could come close to an Olympic medal without any training facilities, then anyone can.

Ramadan curfew, milk shortages, Civil War anniversary: Everything you need to know to start your Monday