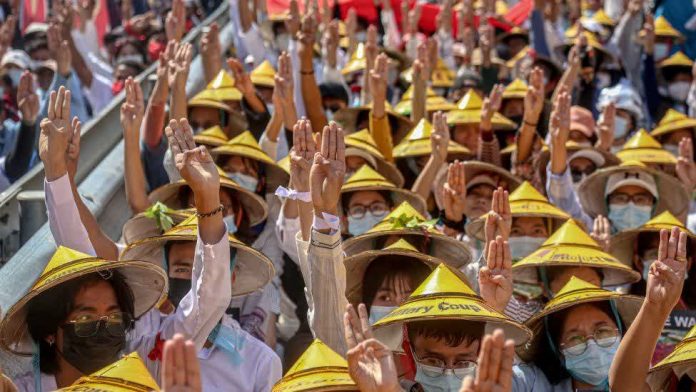 The arrival of the Myanmar junta-appointed foreign minister, Wunna Maung Lwin, in Bangkok on Wednesday for an unannounced meeting with his Thai and Indonesian counterparts marked the start of a of a daunting diplomatic undertaking for South East Asia.

No details were released of what was discussed. This first official contact with a senior member of the junta was so delicate that, when asked about it, Thai Prime Minister Prayuth Chan-ocha was unwilling to confirm that it had even happened.

In fact for every country with an interest in what happens in Myanmar, the crisis presents an unusually thorny challenge.

The responses of the world’s military and economic superpowers have inevitably drawn most attention; the sanctions imposed by the Biden administration in the United States, and those being prepared by the European Union.

There was a predictably bland statement from China, merely urging all parties to settle their differences peacefully.

But China did back a watered-down UN Security Council statement, which, while it failed to condemn the coup, did call for the release of Aung San Suu Kyi and a return to democratic norms, showing that China was not happy about the coup.

But both the US and China have limited options over how they deal with the Myanmar crisis.

The influence of the US is much diminished in this region, far lower than the last time it imposed wide-ranging economic sanctions in the 1990s.

media captionMyanmar coup: How did we get here?

Yet even those sanctions, which helped cripple the Burmese economy, had little influence on the decisions made by the then-ruling junta.

The more limited, targeted sanctions imposed now are intended to hit only those directly involved in the coup and the military’s businesses, but will likewise do little to change minds in Nay Pyi Taw.

The crisis has come very early in the Biden administration just as it was beginning to formulate a new approach to the Asia-Pacific region, one which is supposed to emphasise democratic values and also working in co-operation with regional partners like the 10-member Association of South East Asian Nations (Asean).

But, like China, Asean will not sign up to an approach based on sanctions and condemnation of the junta.

China looks like a winner from the coup, as the one superpower willing to engage with the new regime and keep supplying it with weapons and investment.

However, it is no secret that China was more comfortable dealing with the National League for Democracy (NLD) government, under which relations had been getting warmer, than with an unpredictable military regime which has a deep historical mistrust of its larger neighbour’s influence, especially over some armed insurgent groups on their common border.

Yet the widespread belief in Myanmar that China is backing the junta is feeding growing anti-Chinese sentiment among the millions now protesting against the coup – so much so that Chinese officials have been forced to break their customary silence and come out to deny rumours that China is helping the military build an internet firewall, or bringing in special forces to help crush the protests.

The passionate opposition to the coup also raises the spectre of longer-term instability in Myanmar, which threatens China’s substantial economic and strategic interests there. For all these reasons Beijing will want to tread very carefully.

The United Nations has an unhappy record of engagement in Myanmar – the failed missions of several special envoys to promote a democratic opening in the two decades after the 1988 uprising, the largely fruitless efforts of successive human rights rapporteurs, and controversy over the silence of resident UN agencies over the repression of Rohingya leading up to the atrocities and mass exodus of 2017.

The current special envoy, Swiss diplomat Christine Schraner Burgener, has the unenviable task of finding the ingredients for a compromise which might lead Myanmar out of the present dangerous confrontation between the military and the people.

She is seeking a meeting with representatives of the new government as a matter of urgency, but any such meeting would be conditional on her also being able to meet Aung San Suu Kyi, currently detained in an unknown location, and could not be seen to give any formal recognition to the junta.

She will also be coming with a mandate from UN Secretary-General Antonio Guterres, who has stated that the coup must be made to fail, which will make winning the trust of the generals difficult.

Few believe the coup leader, General Min Aung Hlaing, is ready to discuss giving up the power he has seized.

Some of his subordinates may disagree with the coup, and recognise the huge risks it poses to Myanmar, but the Tatmadaw rarely allows differences of opinion within its ranks to show.

Aung San Suu Kyi, whose renowned intractability helped her weather 15 years of house arrest, may be no more inclined to compromise than the man who deposed her.

The way the coup has poisoned the ground for any compromise was illustrated by the fate of Indonesia’s efforts this week to start an Asean initiative on Myanmar.

With Myanmar as a member, and bound by its customary consensus-based decision making and non-interference in each other’s domestic affairs, Asean has particular challenges in addressing this crisis.

But it must, as further confrontation and bloodshed in Myanmar would have serious repercussions for the stability and reputation of the association, and in particular for countries like Thailand which share long borders.

Thai authorities are already making preparations for the possibility of large numbers of people fleeing across the border.

Asean is not speaking with one voice on Myanmar.

Thailand, Vietnam, Cambodia, and initially even the Philippines, once the most liberal member state on human rights and democracy, have all refused to criticise the coup, describing it as an internal matter.

Singapore, the biggest foreign investor in Myanmar, has been stronger in its statements, expressing “grave concern” and describing the use of lethal force against protesters as “inexcusable”.

It is Indonesia, Asean’s largest country with a past history of taking the leading role in resolving issues like the Cambodian conflict in the 1980s, which has stepped up to try to find a path out of the crisis in Myanmar.

Foreign Minister Retno Marsudi, more than six years in the job, is among the most experienced in the region, and was active in seeking solutions to the Rohingya crisis four years ago.

Indonesia is distant from Myanmar, sharing no borders nor holding any great economic or strategic stakes in what happens there.

And as another large, multi-ethnic, post-colonial state in which the armed forces played a central role in nation-building, Indonesia has sometimes been viewed by the generals in Myanmar as something of a model.

However, when Ms Marsudi began exploring the possibility of holding a special Asean meeting on Myanmar, details of the proposals being discussed with other member states were leaked – in particular the idea of holding the junta to its promise of a new election within a year, and insisting that Aung San Suu Kyi and other NLD politicians be released and allowed to contest.

As a compromise, that idea makes some sense.

But it enraged anti-military protesters in Myanmar, who argue that last November’s election overwhelmingly won by the NLD must be honoured, and that backing a new election rewards the military for overturning the results of the last one and will only encourage them to mount further coups.

For all of its weaknesses, Asean remains the one forum where senior Burmese officials will be welcomed, and where channels of communication remain open.

It may be best placed to facilitate passing messages to the generals from the rest of the world, and hearing back from them their thoughts on how to resolve the crisis.

The sanctions applied by western countries will not move the generals much at this stage, but their removal could be used as the carrot to induce the Tatmadaw into moving away from confrontation and repression.

Engagement by Myanmar’s Asian neighbours will not move the notoriously xenophobic generals much either, but if well-coordinated with the pressure applied by the West, it might produce positive results.

The military men who still dominate the government in Thailand have an opportunity here to show statesmanship, and to use their close personal ties to Min Aung Hlaing to explore possible openings.

China’s influence will also be critical.

Will it sit back, and wait to see if the military crushes the protest movement, and then resume business as usual, or will it join the search for a negotiated way out?

China has yet to reveal its hand in this fiendishly complex diplomatic game.