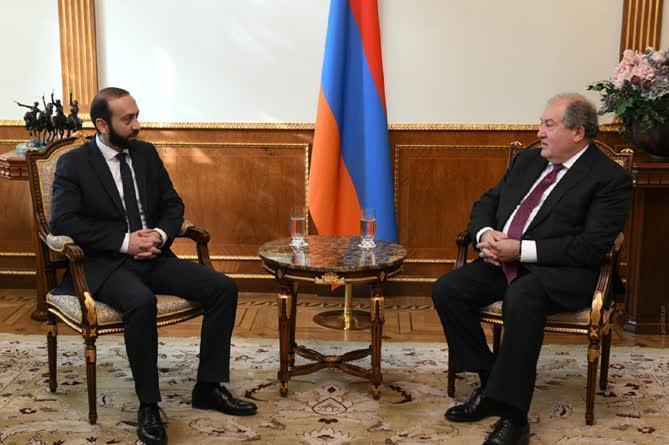 YEREVAN, February 26. /ARKA/. On Friday, Armenian President Armen Sarkissian met with the Speaker of the National Assembly Ararat Mirzoyan, reported the press service of the head of state.

They were said to have discussed the role of the President and Parliament in defusing the current internal political situation in the country.

Sarkissian was expected also to meet with the chief of staff of the armed forces Onik Gasparyan, and leaders of parties, represented in the National Assembly.

Onik Gasparyan was fired by Prime Minister Nikol Pashinyan February 25 t after the leadership of Armenia’s armed forces called for his and his government’s resignation.

On the same day the prime minister addressed thousands of his supporters who gathered in the center of Yerevan to show their support for him, saying Armenians would not allow the armed forces to interfere.

The military officials’ statement came amid renewed protests against Pashinyan and his government, led by a coalition of opposition parties who also have been calling on Pashinyan step down blaming him for Armenia’s defeat in last year’s war with Azerbaijan over Nagorno-Karabakh.

In a February 23 interview with local television, Pashinyan said that the Russian-made Iskander missiles launched during the war in Nagorno-Karabakh didn’t explode, or maybe ten percent of them exploded.

Pashinyan’s comments were a response to an interview the week before by ex-president Serzh Sargsyan, who criticized Pashinyan for not using the Iskander missiles until the last days of the war.

The deputy chief of the general staff, Tiran Khachatryan, was asked in a February 24 interview about Pashinyan’s comments, and reportedly began his response by laughing saying that Pashinyan’s assessment of Iskander’s efficiency was ‘superficial and not serious.” He was fired later the same day.-0-