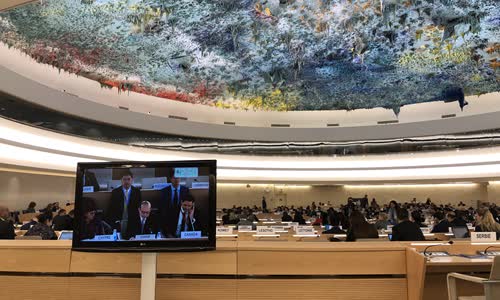 Ambassador Chen Xu, permanent representative of China to the United Nations office in Geneva and other international organizations in Switzerland, speaks during the 43rd session of the UN Human Rights Council. Photo: Liu Xin/GT

As a new round of silent battles initiated by the US and its allies using the excuse of human rights to attack countries, particularly China and Russia, had been waged at the 46th United Nations Human Rights Council (UNHRC) in recent days, analysts warn that as the US re-engages with the UN body and touts the idea of a “democratic alliance,” they may adopt more aggressive measures to pressure China and Russia by further politicizing human rights issues.

However, they noted that as China’s definition of human rights and its practices in protecting and ensuring such rights – for example, lifting 770 million Chinese people out of poverty over the past four decades – have been gradually recognized by more and more countries, it may be difficult for the US to regain leadership in the human rights domain  or for the West to use the UNHRC as a political tool.

Confronted with stern situation ahead, Russian experts also suggested China and Russia strengthen their cooperation in human rights field and there should be more “wolf warriors” disclosing Western violations of human rights.

In response to the UK, the EU, Germany, the US, Canada and a few others countries’  groundless accusations against China, Chen Xu, head of the Chinese Mission to the UN in Geneva, said at the high-level Segment of the 46th session of the UNHRC on Wednesday that turning a blind eye to facts, certain countries fabricated and spread lies about Northwest China’s Xinjiang Uygur Autonomous Region, Southwest China’s Tibet Autonomous Region and Hong Kong in a vicious vilification of China. For these countries, human rights are nothing but a tool for political manipulation.

The US, which withdrew from the UNHRC in 2018 under the Trump administration, reappeared in the Wednesday session as an observer country and its Secretary of State Antony J. Blinken delivered a speech, in which he reiterated lies regarding China’s Xinjiang and claimed that the US is placing democracy and human rights at the center of its foreign policy.

In welcoming their “big brother” – the US – to rejoin the UNHRC, in addition to cooperating with the US to accuse China of “genocide” in the Xinjiang region, some Western countries made their efforts in hyping the alleged Xinjiang issue from the first day of the 46th session of the UNHRC since Monday, analysts said.

Their tactics to politicize the international body have been easily seen through. Russian Foreign Minister Sergei Lavrov denounced these tactics at the session on Wednesday, saying that fake and aggressive media campaigns undermine internal political stability in sovereign states and cause violence and disorder, according to Russia’s Sputnik news agency.

The Russian foreign minister also criticized the West for failing to unite globally in the fight against the COVID-19 pandemic, using the pandemic instead to pressure governments it dislikes and to politicize human rights issues.

After rejoining the UNHRC, the US would take more aggressive measures toward countries it deems “unfriendly,” such as China and Russia as well as Cuba and Venezuela, analysts warned.

The main reason for the US rejoining the UNHRC is China’s increasing influence in the UN body during the US’ absence. Since the COVID-19 pandemic began, the US has been worried that China, which performed better in fighting the deadly disease, would gain leadership in international organizations, Mao Junxiang, executive director and professor at the Human Rights Studies Center, Central South University, told the Global Times on Thursday.

For instance, although being absent from the UNHRC, on March 7, seven US senators sent a letter to UN Secretary-General António Guterres expressing opposition to the appointment of Minister Jiang Duan from China’s mission in Geneva to a seat on the consultative group of the UN Human Rights Council.

Mao predicted that when the US resumes its UNHRC membership, it will ramp up efforts by using alleged issues related to China’s Xinjiang, Hong Kong and other regions to attack China. Moreover, the US may draw upon its Western allies to form a so-called democratic coalition at the UNHRC to push key topics such as lies regarding an alleged “genocide” occurring in Xinjiang.

Under the guidance of the so-called human rights diplomacy, the US would also adopt more aggressive stances and measures against countries it deems as “evil” such as Russia, Cuba or Venezuela. It would also use UNHRC agendas, a universal periodic review or other procedures to make trouble, trying to push UNHRC reforms and place hurdles for nominees from developing countries in attaining crucial positions in the UNHRC, Mao said.

Aside from attacking China together with Western allies on topics regarding Xinjiang, Tibet and Hong Kong, the US would also focus on touting its definition of human rights to regain leadership in the field.

Rejoining the UNHRC is the US’ plan to redefine the concept of human rights and its countermeasures against China’s efforts in trying to enrich the current system, Zhu Ying, deputy director of the National Human Rights Education and Training Base at the Southwest University of Political Science and Law, told the Global Times on Thursday.

Part of the reason why the Trump administration withdrew from the UNHRC in 2018 is that they believed the standards for human rights under the system did not fit its interests or allow for it to use the system smoothly for its own gain, Zhu said.

In recent years, China’s practices protecting human rights, especially regarding its efforts to ensure residents’ basic rights for living and development, have gradually been recognized by more and more countries. And more countries agree with China’s proposals that human rights should not be used as an excuse to interfere with other countries’ domestic affairs, which worries the US and the West, analysts noted.

The West has discussed human rights over several hundreds of years and infused certain concepts globally, highlighting that human rights equal freedoms of speech and religion, or that democracy means each person can vote. As for other issues, they are beyond the boundaries of human rights, Mao said, noting that this is why the US and some Western countries do not deem the astonishing death toll of the COVID-19 pandemic as a fundamental “violation” of human rights.

Neglecting the basic rights for people to live and develop but focusing more on political rights, the US and the West have boasted about their concept of human rights for such a long time and have now encountered questions and increasing reflection about it, noted Mao.

“A German professor at my university told me that he was surprised to see China’s good performance in curbing COVID-19 while the EU and the US have done so poorly. China’s human rights concepts are reasonable,” Mao noted.

A sense of crisis and pressure – both stemming from its culture and economy – has pushed the US and the West to step up its efforts to pressure China by using human rights as excuses. “They simply cannot accept the fact that some countries have gained prosperity by taking a completely different development pattern than theirs,” Mao said.

Some US media outlets have expressed concerns regarding China’s growing influence on defining human rights. For example, The Diplomat, an online news magazine, released an article on Tuesday questioning China’s alleged attempt to reconstruct the very concept of human rights “to better suit” the Communist Party of China.

China is not seeking to implement a separate system for human rights differing from the previous one – it is more like using its own approach, which has been drawn from practices that enrich the current international human rights system, Xu Yao, a research fellow at the Human Rights Research Center of Nankai University, told the Global Times on Thursday.

The death of George Floyd, an African American man who was murdered by a police officer in Minneapolis in May 2020, drew international attention to the problem of racism in the US with protests sweeping many places across the US ever since.

Despite the fact that more loopholes in systems and hypocrisy regarding human rights issues in the US and the West have been exposed further, there are still challenges for China and many other countries to face after the US rejoining the UNHRC with its influence and money, experts said.

Compared with the US and other Western countries, China is a latecomer in the international human rights field. Less Chinese are taking important positions in international organizations and the interactions of Chinese NGOs with their overseas counterparts in addition to departments in the UNHRC remain limited, Xu said.

Xu attended the UNHRC session in February 2020 as an expert of a Chinese NGO. He said that that Chinese experts have limited opportunities to speak for the fields where China has done better and many of their topics for speeches are in marginal fields.

While the US and the West use human rights as an excuse to challenge China, experts suggested that China strengthen cooperation with more countries, especially with Russia.

Human rights are used as a tool to enforce and sustain the current global order in accordance with Western interests. China, Russia and some other nations have already started to formulate a new world order, but it will take time and much effort to formulate a different global humanitarian agenda and render it mainstream for human society, Yuri Tavrovsky, head of the Expert Council of the Russian-Chinese Committee for Friendship, Peace and Development, told the Global Times on Thursday.

Tavrovsky suggested that there should be more “wolf warriors” disclosing Western violations of human rights to help people and organizations in the West find the true situation in their countries and the monopoly of liberalism, BLM and other violations.

Oleg Ivanov, vice rector of research at the Moscow-based Diplomatic Academy, told the Global Times on Thursday that there is space for further cooperation between Russia and China as “we are in the same boat.”

“We can cooperate and unite our efforts on a bilateral basis, taking similar positions on particular issues in the human rights area. Russia and China can also work together in international organizations, such as the UN, BRICS and the Shanghai Cooperation Organization to promote a positive agenda to avoid human rights issues being politicized to punish other countries,” the Russian expert said.