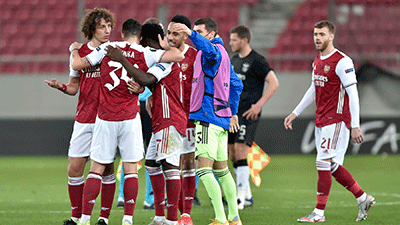 A review of Thursday’s crucial night in the Europa League, as Leicester crashed out after a tame defeat to Slavia Prague.

Lacklustre Leicester crashed out of the Europa League after a tame defeat to Slavia Prague.

Lukas Provod and Abdallah Sima struck in the second half to settle the last-32 tie 2-0 on the night and on aggregate.

Rodgers has never reached the last 16 of the competition after four previous failures with Liverpool and Celtic and his latest miss on Thursday.

The wheels began to fall off Leicester’s Champions League hopes this time last season as they ultimately finished fifth and they now must ensure this blow does not cause lasting damage.

They remain third in the Premier League, also facing an FA Cup quarter-final with Manchester United next month, and the club are on an upward curve but this defeat will hurt.

Pierre-Emerick Aubameyang laid to rest the ghosts of 12 months ago to score a late winner as Arsenal edged out Benfica to advance into the last 16 of the Europa League.

The Gunners were just three minutes away from crashing out on away goals – despite both legs being played at neutral venues.

Current coronavirus travel restrictions meant the Gunners had to ‘host’ the second leg of their round-of-32 tie in Athens, where Aubameyang’s late header saw them win 3-2 on the night and 4-3 on aggregate.

Tied at 1-1 following the ‘away’ leg in Rome last week, Arsenal went a goal ahead through captain Aubameyang only for Diogo Goncalves to level with a fine free-kick, awarded for a foul by Dani Ceballos.

Things went from bad to worse for the Spain midfielder as his poor defensive header allowed Rafa Silva to race through on goal and put the Portuguese club in front just after the hour.

Arsenal needed to score twice to progress into the next round and pulled one back through a low Kieran Tierney strike as the Scotland full-back marked his 50th appearance for the club in style.

Benfica looked to be managing the game well in the closing stages, only for Bukayo Saka to stand a cross up to the back post, where Aubameyang nodded in a dramatic 87th-minute winner.

Arsenal strike late to save their season against Benfica!

Saka and Aubameyang combine AGAIN when it matters most to put the Gunners ahead! 🤝 pic.twitter.com/e9aazd58lR

Nathan Patterson made amends for his Covid rule-breach as his first Rangers goal helped fire Steven Gerrard’s team back to the Europa League’s last-16 with a 5-2 win over Royal Antwerp.

The Ibrox teenager found himself feeling the wrath of his manager and the Light Blues legions after being caught at an illegal house party with four team-mates earlier this month.

But he repaired some of that damage as he slotted home just 16 seconds after climbing off the bench at half-time as Rangers progressed after a high-scoring thriller with the Belgians.

Patterson is still likely to be hammered with a hefty ban from the SFA but he will be free to fill in for injured skipper James Tavernier in the next round after helping Gerrard’s team clinch their place in Friday’s midday draw with a crazy 9-5 aggregate triumph.

This round of 32 tie was all but settled when the Red Devils scored four away goals without reply in Turin last week, yet the Norwegian still named a surprisingly strong side for the return fixture.

Solskjaer had hoped to build momentum and confidence in the second leg at Old Trafford but had to make do with a 0-0 draw and slice of history when introducing teenager Shoretire as they saw out a 4-0 aggregate triumph.

It was a memorable moment towards the end of a largely forgettable clash, with Sociedad skipper Mikel Oyarzabal missing a penalty in the early stages of a first half in which Bruno Fernandes hit the crossbar.

Modibo Sagnan hit the woodwork shortly after half-time and substitute Axel Tuanzebe saw a headed goal ruled out due to a Victor Lindelof foul in the build-up.

But with the tie settled, Solskjaer turned to his highly-rated teenagers as January signing Amad Diallo replaced injured Daniel James before Shoretire came for his record-breaking appearance.