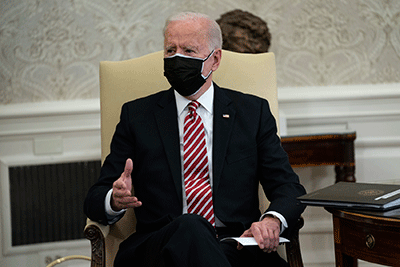 Reeling from the effects of the pandemic, the oil industry is in no mood to fool around. When newly inaugurated President Joe Biden canceled the Keystone XL pipeline project, refiners on the Gulf Coast shuddered. How would they get the Canadian oil they needed? But when President Biden paused all oil and gas permitting on federal lands and waters and canceled lease sales, struggling oil and gas companies took the gloves off and prepared for a fight.

At stake is the industry’s very survival.

One recently announced fight involves Continental Resources, an Oklahoma-based exploration and production company that relies on permits to allow it to conduct its normal business. But in January, on the day President Biden was inaugurated, the Department of the Interior clamped down–on President Biden’s direction–on approving permits for oil and gas exploration on federal lands and in federal waters. It did this not by banning permits outright but by limiting which Interior employees could approve permits. The number of employees to approve permits has dwindled significantly to a total of nine, limited to “leadership” only. It is an effective suspension of the permitting process, although not an outright suspension.

The suspension order, signed January 20, was to last for a period of sixty days–until March 21.

But according to Continental, the Department of the Interior’s actions are unconstitutional, and on February 23, it filed a lawsuit in a U.S. District Court in North Dakota. The challenge, according to the 44-page lawsuit, is that by delaying 50 of Continental’s permits, it has violated a provision in The Mineral Leasing Act, which spells out strict deadlines that the Department of the Interior must follow during the permitting review process.

In other words, the Act tells the DoI how much time they have to rule on permit applications, and this suspension has essentially stalled the permitting process.

But Continental isn’t the only one on this warpath.

The WEA filed their suit in the U.S. District Court for the District of Wyoming–a state that ranks first in federal natural gas production and third in oil. Wyoming also has more federal acres leased than any other state.

Biden’s Keystone XL cancellation has also drawn the wrath of the oil and gas industry, with more than a dozen U.S. states considering a lawsuit against the federal government. The 830,000 barrel per day pipeline project has been stuck in regulatory muck for well over a decade prior to its cancellation.

States were quick to urge Biden to reconsider. But their pleas appeared to have fallen on deaf ears, citing energy security, lost jobs, and lost revenues.

In a letter from 14 Attorneys General, including Montana’s Attorney General Austin Knudsen, the states threatened some type of vague legal action.

“Please be aware that states are reviewing available legal options to protect our residents and sovereign interests. In the meantime, we urge you to reconsider your decision to impose crippling economic injuries on states, communities, families, and workers across the country.”

In a departure from the rash of lawsuits, but no less striking, 24 Republican senators have banded together to support a bill in the U.S. Senate designed to stop the executive order that paused new oil and gas leasing on federal lands. The bill is known as Protecting our Wealth of Energy Resource Act (aka the POWER Act) of 2021 and would prohibit a President or Secretaries of the Interior, Agriculture and Energy departments from blocking energy or mineral leasing and permitting on federal lands and waters without Congressional approval.

Despite the legal challenges, the new administration’s policies show no signs of shifting. Interior Secretary nominee Deb Haaland’s testimony this week would not commit to ending Biden’s suspension of oil and gas leasing. “If confirmed, it is President Biden’s agenda, not my own, that I would be moving forward,” Haaland said, implying that Biden’s green energy vision would be executed. The nominee went on to say, however, that the ban would not be “a permanent thing”.