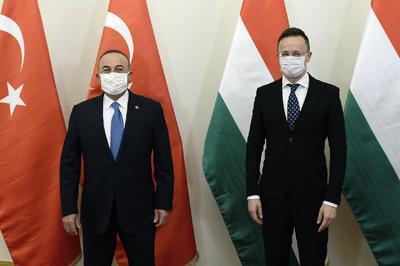 Turkey has denounced the Armenian army’s call for the resignation of Prime Minister Nikol Pashinyan, stressing it is against military coups everywhere in the world.

“We are absolutely against the military coups and coup attempts anywhere in the world. We are strongly condemning this coup attempt in Armenia,” Foreign Minister Mevlüt Çavuşoğlu told reporters at a joint press conference with Hungarian Foreign Minister Peter Szijjarto in Budapest on Feb. 25.

In democracies, it’s normal that the people can criticize the governments and ask their resignations but the army’s call for the resignation of a democratically elected prime minister, let alone overthrowing him, is unacceptable, Çavuşoğlu stressed.

“That’s why we strongly condemn this call by the Armenian army,” he said.

Çavuşoğlu reiterated the need for a regional stability in the Caucasus following the Armenia-Azerbaijan war. “There is a window of opportunity for regional stability. This stability should cover the entire region and not only through the normalization of ties between Armenia and Azerbaijan,” he said.

Turkey and Iran had proposed a regional initiative under the 3+3 format so that Turkey, Iran, Azerbaijan, Armenia, Georgia and Russia can come together to promote prosperity and peace in the Caucasus.

“Stability in each country is therefore very important. This move by the Armenian army disrupts stability,” Çavuşoğlu said.

Turkey stood with Azerbaijan in the six-week-long war in 2020 that ended with the latter’s liberating its territories that were under Armenia’s occupation since early 1990s. Turkey and Armenia have their borders sealed and have no diplomatic ties due to Yerevan’s occupation of the Azerbaijan territories in Nagorno-Karabakh.