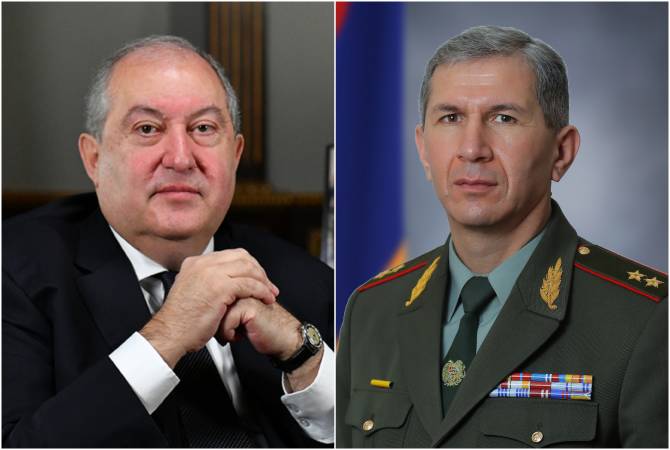 YEREVAN, February 28, /ARKA/. Armenian Prime Minister Nikol Pashinyan has resent a draft decree asking to sack the chief of the general staff of the armed forces Onik Gasparyan to president Armen Sarkissian on Saturday after the latter refused to sign it as required by Armenian law.

Pashinyan first sent the decree to Sarkissian on Thursday after Gasparyan and more than 40 other high-ranking army officers issued a joint statement that accused Pashinyan and his government of misrule and demanded their resignation.

Pashinyan was quick to describe the statement as ‘ a military coup attempt.’ According to president Sarkissian’s office, the president refused to sign the decree after holding a series of meetings with top army brass, leaders of opposition and the ruling parliamentary majority because ‘the decree is unconstitutional and does not seek to address the unprecedented political crisis in the country.’

It says that the president does not support any political party and makes decisions guided exclusively by national interests.

“It is undeniable that the armed forces must maintain neutrality in political matters. It is also obvious that in connection with the war (in Nagorno-Karabakh), the personnel of the armed forces more than ever need support and attention. Solving the problems of the army personnel is a priority and cannot be ignored in no case,” the statement says.

‘The current situation is unprecedented, requiring systemic and comprehensive solutions and cannot be solved by frequent personnel changes without taking into account this situation in the country,” the statement says.

It also says that the president pursues one goal – to protect the country from threats to the constitutional order and security, to ensure the stability of the country and the normal operation of the armed forces.

Pashinyan said Saturday in a Facebook post that Sarkissian’s refusal does not help at all to settle the current situation.

The refusal was welcomed by the opposition that held Saturday another protest rally in front of palriament demanding Pashinyan’s resignation. -0-