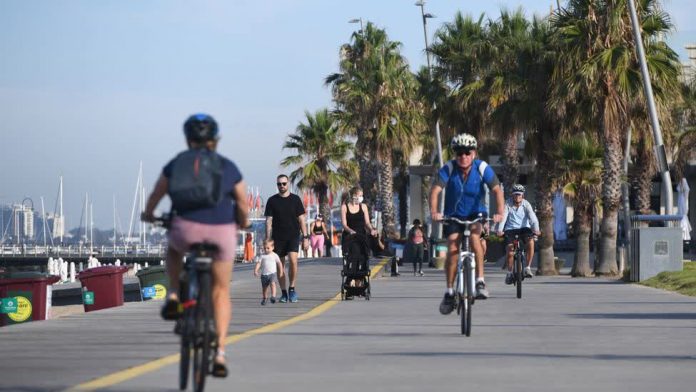 Australia’s economy expanded at a much faster-than-expected pace in the final quarter of last year and all signs are that 2021 has started on a firm footing too helped by massive monetary and fiscal stimulus.

The economy accelerated 3.1% in the three months to December, data from the Australian Bureau of Statistics (ABS) showed on Wednesday, higher than forecasts for a 2.5% rise and follows an upwardly revised 3.4% gain in the third quarter.

Despite the best ever back-to-back quarters of growth, annual output still shrank 1.1%, underscoring the havoc wreaked by the coronavirus pandemic and suggesting policy support will still be needed for the A$2 trillion ($1.57 trillion) economy.

The Australian dollar rose about 10 pips to a day’s high of $0.7836 after the data while bond futures nudged lower with the three-year contract implying a yield of around 0.3% compared with the official cash rate of 0.1%.

“The ‘V-shaped’ nature of the recovery is everywhere to see– economic growth, the job market, retail spending and the housing market,” said Craig James, Sydney-based chief economist at CommSec.

Data on credit and debit card spending by major banks as well as official figures on retail sales, employment and building activity point to a strong start for this year.

Marcel Thieliant, economist at Capital Economics, expects GDP growth of 4.5% in 2021, “which implies that allowing for the slump in net migration due to the closure of the border, the economy will suffer no permanent drop in output as a result of the pandemic.”

Australia’s economy has performed better than its rich-world peers thanks to very low community transmission of COVID-19 together with massive and timely fiscal and monetary stimulus.

“Our economic recovery plan is working, and today’s national accounts is a testament to that fact,” Treasurer Josh Frydenberg said in a news conference. “The job is not done,” he added. “There are challenges ahead. But you wouldn’t want to be in any other country but Australia as we begin 2021.”

On Tuesday, the RBA recommitted to keep three-year yields at 0.1% until its employment and inflation objectives are met, which policymakers don’t expect until 2024 at the earliest.

Indeed, Wednesday’s data showed there was barely any domestic-driven inflation in the economy with the biggest price rises coming from commodity exports.

The RBA has repeatedly said the unemployment rate must fall to around 4% from above 6% now to help drive wages growth above 3% and for inflation to pop back into its 2-3% target band.

“Stimulus and support measures are still very much required,” CommSec’s James said. “Spare capacity will remain in the job market for a few more years, keeping the cash rate anchored at 0.1%.”