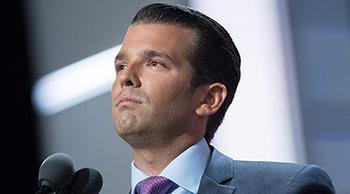 On Monday, almost 50 lawmakers reportedly urged Andrew Cuomo to step down or be impeached after five women accused the New York governor of sexual harassment.

In an interview with Fox News on Monday, Donald Trump Jr. lashed out at New York Governor Andrew Cuomo in connection with the growing public uproar over sexual assault allegations against the Democratic governor.

“This [the nursing home scandal] is probably the bigger scandal, although it seems like perhaps the Democrats are sweeping that under the rug in lieu now of the accusations against our groper-in-chief as governor of New York”, the eldest son of the former president argued.

He was apparently referring to the scandal in January, when Сuomo was accused of covering up nursing home COVID-19 deaths in New York as a report by the state attorney general put the tally at 13,500 versus the official figure of 8,500.

Donald Trump Jr. then went further by likening Cuomo to Pepe Le Pew, a character from the Warner Bros. Looney Tunes and Merrie Melodies series of cartoons that was first introduced in 1945 and depicted as a French skunk.

The former US president’s eldest son also berated the media for trying to turn Cuomo into “a hero” because of his drive to publicly lambast Donald Trump’s handling of the COVID-19 pandemic.

“They made him a deity […] because he was willing to talk poorly about my father, they gave him a throne and they let him do his thing. It was a joke and it was a sham and I think we are starting to realise that now”, Trump Jr. claimed.

Last year, Cuomo accused then-President Trump of “actively trying to kill” New York and other US cities run by Democrats by not providing them with federal funds amid the coronavirus pandemic. In January 2021, the New York governor argued that the nursing homes-related scandal was part of a “political attack” by the Trump administration.

Trump Jr.’s remarks come after two more former employees, Ana Liss and Karen Hinton, accused Cuomo of sexual harassment and other misconduct last week, adding to previous complaints from ex-aides Lindsey Boylan and Charlotte Bennett, as well as Anna Ruch, who was a guest at a wedding the New York governor attended.

With sexual assault and misconduct allegations against Cuomo mounting, he has, however, made it clear that he will not step down.

“I was elected by the people of the state. I’m not going to resign because of allegations. There is no way I resign”, Cuomo told reporters on Sunday. He spoke as about 50 New York lawmakers reportedly urged the New York governor to stand down or face impeachment.

Gantz to Austin: We will work with US to ensure new Iran deal protects Israel