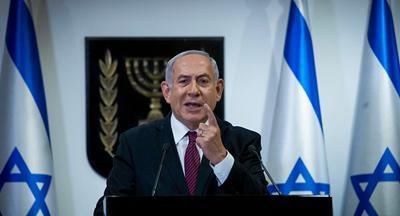 By Arab News -By Yossi Mekelberg*

It is not only Israelis who are becoming accustomed to their endless rounds of elections — this week’s being the fourth in two years. The whole region is being forced to consider the impact on Israel’s policies toward its neighbors, especially toward the Palestinians.

The intrinsic instability of the Israeli political system means that whenever an election takes place, it creates anxious anticipation across the Middle East and North Africa, a nervousness arising from the vacillations in Israel’s policies that in turn derive from both the need to lure voters and the constraints of the constant, excruciating and never-ending formations and dissolutions of coalitions.

Tuesday’s general election does not guarantee a more decisive result than the three before it.

In the meantime, the current prime minister, Benjamin Netanyahu, is conducting both his domestic and international policies not necessarily to serve the interests of the country and its people, but first and foremost to prolong his time in office, and at this stage mainly to escape justice in his corruption trial on three cases of bribery, fraud and breach of trust.

For both the Israeli electorate and for the international community, in the more than four years since the investigation into Netanyahu’s corrupt and hedonist behavior began, it has become almost impossible to discern which of the Israeli government’s policies stem from a genuine strategic outlook and which are merely to serve Netanyahu’s attempt to derail his trial and avert conviction.

Yet, scanning the various possible post-election scenarios, as far as Israel’s policies in the region are concerned, one cannot foresee dramatic changes, whether Netanyahu stays or quits.

The great danger is that if Netanyahu remains in office, the trend of decisions taken to divert the course of justice will continue, and this might lead to adventurism and pandering to his right-wing base.

If his time in politics comes to an end after Tuesday’s election, Israel is likely to end up with some species of right-wing government, one which might include more centrist elements, but not necessarily.

Of the three other likely candidates for the prime ministerial role, Yair Lapid of Yesh Atid, Naftali Bennet of Yamina and Gideon Saar of New Hope, it is only Lapid who might offer a less hawkish foreign policy and one more accommodating towards the Palestinians.

However, considering the other members of what would inevitably be a coalition government, his room to maneuver would be very limited, and even more so if a post-Netanyahu Likud were to be part of that coalition.

Hence, any changes if they take place might be more nuanced in all regards.

An external observer of Israeli politics might expect the Palestinian issue to be high on the public agenda, if not top of it at election time; however, this is not the case.

The issue has been marginalized in inverse correlation to its importance to Israeli society and is confined to small parties either on the left or those of the Joint Arab List. None of the major parties are prepared to offer an alternative discourse, or to call out the dire conditions under which the Palestinians are forced to live in the West Bank and Gaza.

No party is ready to confront the practical, let alone the moral, implications of the continuous occupation of the West Bank and the blockade on Gaza, which is also a form of occupation.

The conventional wisdom, or rather the collective denial, is that there is no partner for peace on the Palestinian side, and as things stand there is no sense of urgency to enter into genuine peace negotiations, based on a two-state solution and a fair and just resolution of all outstanding issues, including the status of Palestinian refugees and the future of Jerusalem.

Judging by the polls and consequently the different scenarios of a future coalition government, it is possible that those who call for the annexation of large swaths of land in the West Bank — a threat that was halted last summer by the Abraham Accords — might be extremely influential in the next government.

Such elements might push to expand the Jewish settlements, legalize dozens of outposts in the West Bank that even in the eyes of the Israeli government are illegal, confiscate more Palestinian land and generally make the lives of Palestinians as uncomfortable as possible.

Depending on the composition of the Knesset, there could emerge a more pragmatic government, but one that still would be under pressure to at least maintain the sorry status quo.

A major issue that will be high on the next government’s agenda is Iran, and closely related to it, relations with Syria and Lebanon. For Israel, especially under Netanyahu, the JCPOA nuclear agreement with Tehran was from its outset like a red rag to a bull. It opposed it, never believed that Tehran would adhere to its terms, and saw it at best as delaying rather than preventing Iran’s development of nuclear military capability.

There is a wide consensus in Israel that Iran is posing, if not an existential threat to Israel, then at least a very severe one. The corollary of that is a proactive Israeli approach, whether diplomatically or through covert and overt operations in Iran, Syria and other parts of the world where Tehran operates against Israeli targets.

There might be a more nuanced approach in a government not led by Netanyahu, one that would avoid confrontation with the Biden administration if it is determined to re-join the JCPOA, as long as it offers a more stringent inspections regime and constraints on Iran’s development of long-range missiles.

In this context, any incoming Israeli government will be concerned with the consolidation of Iran’s military presence in Syria and air raids on Iranian targets there will continue, along with attacks on arms convoys bound for Hezbollah in Lebanon.

The military build-up of the latter on Israel’s northern border, which includes an enormous arsenal of precision-guided missiles, is a threat that Israel’s strategists take very seriously.

As with Iran’s nuclear program, deterrence, quiet diplomacy and limited operations will remain Israel’s policy of choice. However, should Hezbollah cross a certain threshold, open hostilities remain a real possibility.

Lastly, one of Netanyahu’s rare achievements in recent years has been the normalization agreements with the UAE, Bahrain, Morocco and Sudan, adding to the existing informal cooperation with Saudi Arabia, and the peace agreements with Egypt and Jordan.

Maintaining this state of affairs and building on it will be the task of the next government. However, as long as the Palestinian conflict lingers on with no sign of a satisfactory solution, it could always become a spoiler in these regional relations, as we have seen recently with the growing tension between Israel and Jordan.

It is safe to say that in the wake of this week’s Israeli election, we will see more continuity than change as far as the region is concerned, but the composition of the next coalition and the main forces in it may still usher in some changes — for better or worse.

* Yossi Mekelberg is professor of international relations at Regent’s University London, where he is head of the International Relations and Social Sciences Program. He is also an associate fellow of the MENA Program at Chatham House. Twitter: @YMekelberg

Arab News is Saudi Arabia’s first English-language newspaper. It was founded in 1975 by Hisham and Mohammed Ali Hafiz. Today, it is one of 29 publications produced by Saudi Research & Publishing Company (SRPC), a subsidiary of Saudi Research & Marketing Group (SRMG).