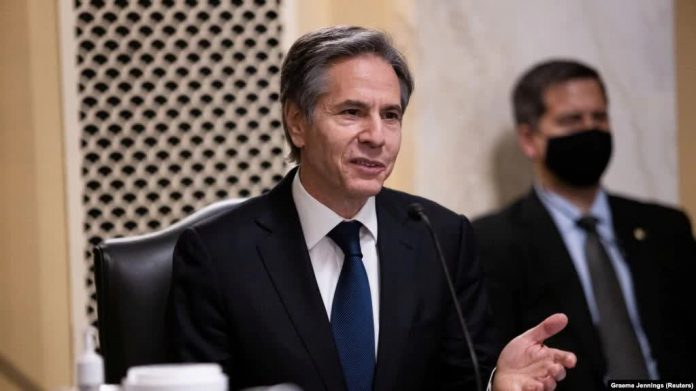 The US and the island of Taiwan have recently been engaged in a war of public opinion over tensions across the Taiwan Straits. US Secretary of State Antony Blinken said on Sunday the US is concerned about “China’s aggressive actions against Taiwan” and alleged that “it would be a serious mistake for anyone to try to change that status quo [in the Western Pacific] by force.” However, asked if the US would respond militarily to the Chinese mainland’s actions against the island of Taiwan, Blinken declined to comment on a hypothetical

On the same day, the US Navy released a photo in which the commanding officer and executive officer of the USS Mustin destroyer can be seen watching on as China’s aircraft carrier Liaoning sails thousands of meters away. The captain has his feet up in a decidedly nonchalant pose as the pair watch on. Media from Taiwan emphasized the pose shows the US doesn’t take the People’s Liberation Army (PLA) seriously, reflecting some people in Taiwan placing strong hope on the US.

The military of Taiwan and local media jointly staged a “leak incident” recently. The local-run Youth Daily News published photos of a secretive truck-mounted radar system for detecting the PLA’s J-20 stealth fighters, in an attempt to use intelligence warfare to convince the Chinese mainland that the island is capable of dealing with the J-20 aircraft. According to local media, defense officials of Taiwan revealed that the “airspace” over Taiwan is divided into three zones: surveillance, warning and destruction. The “airspace” overlying the waters at 30 nautical miles is the “red line” that prevents the PLA’s aircraft from approaching, and they can fire at the PLA’s aircraft that have entered the destruction zone.

For one thing, there is no way for the Chinese mainland to accept Blinken’s “warning.” The status quo across the Taiwan Straits has already been broken by the Democratic Progressive Party (DPP) after it came to office in 2016. They abandoned the one-China consensus and pushed the cross-Straits situation into turmoil. From the Trump administration to the Biden administration, the US has connived with the risky policy of the DPP authority, and constantly broke the original “one China” policy system and changed the status quo across the Straits. China’s adherence to the one-China principle is a countermeasure to the disruption of the status quo in the Taiwan Straits.

China has the Anti-Secession Law, which demands the use of force to address serious moves of secession. To be sure, if the DPP authorities continue the salami-slicing tactics in a bid to split the country with the connivance of the US, then the Chinese mainland will pile more military pressure on the island. If the US continues to send the wrong signal to the DPP authorities and embolden them to engage in reckless moves, a war across the Straits is destined to break out sooner or later.

Even if the US openly declares that it will use force in the Taiwan Straits, the Chinese mainland will never waver in its will to safeguard its sovereignty and territorial integrity. Once the situation in the Taiwan Straits gets out of control and the mainland is determined to realize reunification by force, we will definitely be fully prepared to deal with possible intervention by US forces. We believe that our will to deal with extreme conflicts in the Straits is far greater than that of the US.

The release of the photo by US Navy was to show the tensions in the Western Pacific and to emphasize the US military presence there in a bid to appease and encourage US allies. The shallow move has worked given the reaction of Taiwan media.

But the US military’s arrogance, which Taiwan media interpreted from the photo, has long been shattered in the coastal waters of China. The US military cannot do whatever it wants in China’s surrounding waters where the PLA is capable of substantially subduing US impetuousness. The US prefers that its allies lead provocations against China while it can act as a deterrent force to maintain such a scenario. However, both Taiwan authorities and Washington are aware that such tactics is more difficult to sustain.

The island of Taiwan’s so-called “airspace” red line is especially ridiculous. The PLA is prepared to send warplanes to fly across the island of Taiwan to declare sovereignty in case of further hostile behavior by DPP authorities. It is also prepared to punish those “Taiwan secessionists” fundamentally if the island’s troops open fire first. If the Taiwan military dares to fire the first shot at the PLA under any circumstance, that shot will be the death knell of the DPP authorities and the beginning of the reunification.

The Chinese mainland, from government to its people, loves peace. Eight years before the current DPP authorities came to power, cross-Straits relations eased significantly and a period of common peaceful development was achieved. However, as the DPP came to power and pursued extremely hostile policies toward the mainland, the peaceful development was ruined. The Tsai Ing-wen authority is the main culprit for the gradual turbulence in the Taiwan Straits.

As the situation in the Straits has deteriorated, the risk of a full-scale war in the Straits due to accidental minor incidents is increasing. The only way to eliminate this risk is for the DPP to change its policies toward the Chinese mainland, and for the US to abandon its plans to use the island of Taiwan as a pawn in containing China. If the US and the island of Taiwan do not think about changing their plans and still try to crush the will of the mainland by playing tricks, then they are playing the wrong game. They need to bear the consequences of the sudden change in the situation in this uncertain, complex and dangerous game.