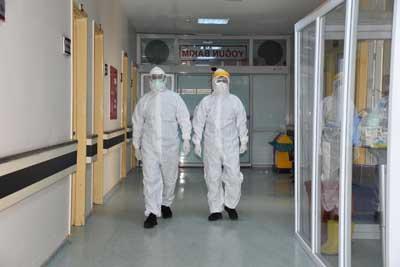 Intensive care occupancy in the Turkish metropolis Istanbul is at 71.4% amid a surge in coronavirus cases, Turkey‘s health minister said on April 19.

Following a virtual meeting with local authorities in Istanbul, as well as other northwestern provinces grappling with the highest case rises in the country, Fahrettin Koca said on Twitter that the occupancy of intensive care units in Tekirdag is at 73.5%, 67.1% in Canakkale, 69% in Kirklareli, and 55.4% in Yalova.

“We evaluated the course of the outbreak and the measures taken in these provinces,” said Koca after meeting with these provinces’ governors and health directors.

Istanbul has nearly one-fifth of Turkey’s population and has been a hot spot for the virus.

According to the Health Ministry figures, since its vaccine campaign began in mid-January, Turkey has so far administered over 20 million coronavirus vaccine jabs across the country.

Meanwhile, Turkey on Monday entered a new phase of COVID-19 vaccination campaign as those 55 years of age and older have begun to be vaccinated.

Koca on Twitter announced the new stage in the mass vaccination campaign and asked all those aged 55 and over to get a jab.

“We will press ahead with our vaccination campaign depending on supply conditions,” Koca added.

Since Turkey began its COVID-vaccination campaign on Jan. 14, it has administered over 20 million coronavirus vaccine jabs, according to official figures.