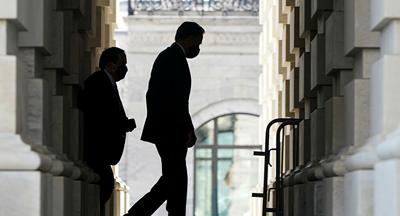 https://www.bbc.com-media caption Mitt Romney was booed by delegates at a GOP conference in Utah

US Senator Mitt Romney has been booed by Republicans at a convention in Utah.

The Utah senator and former presidential candidate was the only Republican to vote twice to impeach ex-President Donald Trump.

As Mr Romney took the stage at a state party convention in West Valley City, delegates shouted that he was a “communist” and a “traitor”.

Amid the jeering, he asked the crowd: “So what do you think about President Biden’s first hundred days?”

Mr Romney added that he was “a person who says what he thinks, and I don’t hide the fact that I wasn’t a fan of our last president’s character issues”.

He started to say “and I’m also no fan…”, but then had to stop speaking again because of the volume of the booing.

After a pause, the senator asked the crowd of 2,100 delegates: “Aren’t you embarrassed?”

State party chair Derek Brown then stepped in and pleaded with everyone to “please… show respect”.

Despite this show of disapproval, a motion to censure Mr Romney for his votes to impeach Mr Trump failed narrowly. Mr Romney urged people to “come together in strength and unity” before leaving the stage.

A moderate Republican, Mr Romney is not facing re-election to the Senate in 2022.

This incident is seen as an example of how, despite his election loss last year, Mr Trump continues to be popular within the party.

A CNN poll released this week suggested 70% of Republicans still believe Mr Trump’s allegations that President Joe Biden did not legitimately win the election – despite the claims being repeatedly proven to be false.

Mr Trump is the only president in US history to have been impeached twice.

The first time, in December 2019, was for asking Ukraine for dirt on his political opponents.

The second was for inciting a deadly storming of the Capitol on 6 January this year, after repeating his claim of electoral fraud. Before the riot, he told a crowd of supporters to “fight like hell”.

He was acquitted at both impeachment trials.