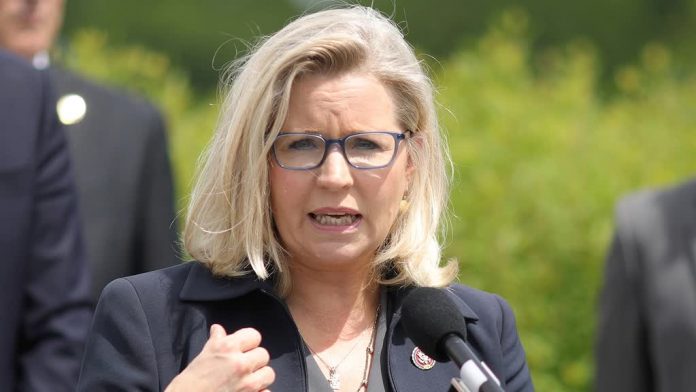 https://www.bbc.com-US Republicans are to vote on whether to oust one of their leaders, Liz Cheney, over her repeated criticism of former President Donald Trump.

The Wyoming lawmaker, daughter of ex-US Vice-President Dick Cheney, is expected to lose her third-ranking post in the House of Representatives.

On Tuesday she criticised her party for not standing up to Mr Trump’s false claims to have won the 2020 election.

The top two House Republicans want her replaced with a Trump loyalist.

The move is seen as a sign Mr Trump’s grip on the party is stronger than ever six months after he lost the election.

In an impassioned speech on the floor of the House of Representatives, Ms Cheney trained her fire again on Mr Trump over his unfounded claims the 2020 vote was stolen from him.

“Remaining silent and ignoring the lie emboldens the liar,” she said on Tuesday.

“I will not sit back and watch in silence while others lead our party down a path that abandons the rule of law and joins the former president’s crusade to undermine our democracy.”

Her fate is expected to be decided by a simple majority of House Republicans behind closed doors on Wednesday morning.

Why is Cheney in trouble?

Her political fall from grace stems from the aftermath of the Capitol riots on 6 January, when Trump supporters stormed Congress.

She was one of 10 members of her party who voted days later with Democrats to impeach the then-president for incitement of insurrection. He was acquitted in the Republican-controlled Senate.

Accusing her of disloyalty, rank-and-file House Republicans held a vote a month later on unseating Ms Cheney from her role as party conference chair.

But the party’s leader in the lower chamber, Kevin McCarthy, advised colleagues at the time against removing her. She survived the secret ballot by 145-61. Since then she has continued to upbraid Mr Trump.

The final straw for many party colleagues seems to have been her anti-Trump broadside last week in a Washington Post op-ed. After its publication, Mr McCarthy and his deputy, Republican whip Steve Scalise, began taking steps to oust Ms Cheney.

Mr McCarthy was recently caught on a hot mic telling a Fox News presenter: “I’ve had it with her. You know, I’ve lost confidence.”

On Monday, the California congressman wrote to his colleagues: “Each day spent relitigating the past is one day less we have to seize the future.” He added: “It’s clear that we need to make a change.”

Liz Cheney’s remaining tenure as the third-ranking Republican in the House of Representatives can probably be measured in hours. With the party’s leadership, including former President Donald Trump, against her, it’s all over but the (secret ballot) voting.

Unlike during the February challenge to her position, she hasn’t been trying to rally support this time around. Instead, she seems content as a martyr to the anti-Trump cause.

House Republicans may think that by removing Ms Cheney the party has removed a distraction and now will be able to shift focus to winning the 2022 mid-term elections.

That may prove difficult even with Ms Cheney gone, however, as it’s Mr Trump himself who has been most unwilling to let go of last year’s defeat. He talks about it, fires off press releases about it and continues to encourage rank-and-file Republicans to undertake quixotic investigations of it, like the ongoing “audit” of the vote in Arizona.

Democrats would love nothing more than to make upcoming elections a referendum on Trump and Trumpism. It’s the former president, not Ms Cheney, who seems the happiest to oblige.

Who could replace her?

Elise Stefanik, a four-term congresswoman from upstate New York, is the current favourite to succeed Ms Cheney if she is removed, though such a vote is expected to take place at a later date.

A former critic of Mr Trump, the 36-year-old has morphed over the last couple of years into one of his staunchest allies.

He repaid her loyalty on Monday with an endorsement.

“The House GOP has a massive opportunity to upgrade this week from warmonger Liz Cheney to gifted communicator Elise Stefanik,” he said in a statement.

However, not everyone in the party supports Ms Stefanik, with some complaining that her voting record in the House is too liberal.

Chip Roy, a member of the hardline conservative Freedom Caucus, set forth his opposition to Ms Stefanik in a memo to colleagues on Tuesday.

“Let us contemplate the message Republican leadership is about to send by rushing to coronate a spokesperson whose voting record embodies much of what led to the 2018 ass-kicking we received by Democrats,” the Texas congressman wrote.

What next for Cheney?

She is now fighting for her political life back in her constituency, where her party has already voted at the state level to censure her for voting to impeach Mr Trump.

At least five Republicans have filed paperwork with the Federal Election Commission to run against her in 2022.

Of the 10 Republicans who voted to impeach Mr Trump, nine in total now face primary challengers from within their party to unseat them from Congress next year.

What next for Trump and the party?

Mr Trump has been hinting he may run for the White House again in 2024.

Polls indicate he would easily recapture the Republican nomination for a rematch against US President Joe Biden, should the Democrat run for a second term.

Exasperated by Mr Trump’s stranglehold on the party, more than 100 Republicans, including some former elected officials, plan to release a letter this week threatening to form a third party, reports the New York Times.