“We call on the international community to intervene swiftly to stop these attacks, which will cause further loss of civilian lives,” read a written statement issued by the Turkish Foreign Ministry on May 14.

The statement came as the news reported that Israeli troops were preparing for a more comprehensive attack against Gaza as the death toll exceeded 109 as of early May 14.

“The rapid increase in civilian casualties in Israel’s airstrikes against Gaza, the damage to the schools affiliated to the U.N. Relief and Works Agency for Palestine Refugees [UNRWA], injuring the cameraman and photojournalists of Anadolu Agency serving in the region, clearly reveal Israel’s disproportionate indiscriminate attacks,” the ministry stated.

“It was learned with concern that Israel started firing tanks and artillery against Gaza this time,” it added.

Erdoğan warned on May 14 that the situation may worsen in Palestine in case the Israeli attacks are not halted and called on both individual countries and international organizations to swiftly intervene.

“It is imperative that the U.N. Security Council rapidly take steps to ensure peace and tranquility in Jerusalem, in line with the decisions taken in the General Assembly. As Turkey, we are ready to actively support any initiative launched within the U.N. and to take responsibility for peace,” Erdoğan said.

Turkey’s stance based on principles

Underlining that Jerusalem is the sacred city for three main religions and that Israeli attempt to loot the city is unacceptable, President Erdoğan accused Tel Aviv of crossing all the possible limits in Jerusalem.

“To stand against Israel’s aggression in Palestinian cities, Jerusalem is duty of honor for humanity,” he said, describing Israel as a terror state. “Those who remain silent or openly back Israel’s bloodshed should know one day it will be their turn.”

Erdoğan recalled that he spoke with the leaders of 19 nations so far in a bid to coordinate diplomatic actions against Israel.

“Our stance towards Israel is principle-based,” he said, likening Turkey’s support to Azerbaijan’s efforts to liberate its territories from Armenian occupation with the current support pledged to Palestine against the Israeli offensive.

“Turkey will not remain silent on Israeli persecution in Palestine, even if the entire world ignores it,” he said.

Meanwhile, Turkey’s presidential spokesperson urged the international community early on May 14 to prevent the escalation of Israel’s aggression against the Palestinian people.

İbrahim Kalın said on Twitter that Israel’s attacks on the Palestinian community “are against international law and basic morality” and “must come to an immediate end.”

Noting that Turkey will keep supporting the Palestinians, he said: “We urge the world to take action now to stop the new waves of Israeli aggression.”

Vice President Fuat Oktay on May 13 denounced Israeli aggression on the Al-Aqsa Mosque in occupied East Jerusalem and Palestinians, underlining that the city “is and will remain the capital of Palestine.”

“We have Palestinian martyrs and brothers and sisters wailing under Israel’s reckless attacks and persecution,” he said.

“You drop bombs on vulnerable people. Then you go and make accusations claiming self-defense without feeling shame … This is a shame upon humanity,” he added.

“The world, especially Islamic countries, must take a common stance against [Israel’s] attitudes, occupation and policies of cruelty that are against international law,” Şentop said.

Tensions have been running high in the Sheikh Jarrah neighborhood in occupied East Jerusalem over the past month as Israeli settlers swarmed in following a court order for the eviction of Palestinian families in the area.Most recently, tensions further escalated, moving from East Jerusalem to Gaza after Palestinian resistance groups there vowed to retaliate against Israeli assaults on Al-Aqsa Mosque and Sheikh Jarrah if they were not halted.

Israel occupied East Jerusalem during the 1967 Arab-Israeli war and annexed the entire city in 1980 – a move that has never been recognized by the international community. 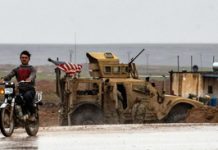