YEREVAN, MAY 18, ARMENPRESS.  One of the clergy of the Armenian Patriarchate of Jerusalem has been attacked by Jewish youth.

ARMENPRESS reports the Armenian Patriarchate of Jerusalem issued a statement over the incident, strongly condemning the attack on member of the St. Hakobyants Congregation Reverend Father Arbak Sarukhanyan by the Jewish youth.

Father Arbak received bodily injuries and was immediately hospitalized. After receiving necessary medical aid, he has been discharged.

”The Patriarchate submitted an official complaint to the Police, after which three of the attackers were arrested. We demand that the Police conduct a fair investigation and that the perpetrators be punished in accordance with the law in order to avoid a recurrence of such incidents in the future’’, said Father Koryun Baghdasaryan, Chancellor of the Armenian Patriarchate of Jerusalem. 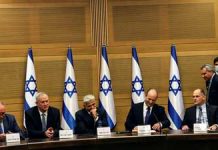