https://www.turan.az-Tensions on the Azerbaijani-Armenian border, which began on May 13, have not yet completely subsided.The acting Prime Minister of Armenia, Nikol Pashinyan, said at a government meeting on May 13 that the Azerbaijani Armed Forces crossed the border and entered the territory of Armenia several kilometers away.The Ministry of Foreign Affairs of Azerbaijan issued a statement on the situation on the border with Armenia on May 13. The statement said that according to the tripartite statement signed on November 10, 2020, Azerbaijani border forces are deployed in the positions of the liberated Lachin and Kalbajar districts bordering on Armenia, which have difficult mountainous terrain and climatic conditions.Despite the mutual statements of both sides, the tension on the border has attracted the attention of the US Department of State, the OSCE Chairperson-in-Office, the leaders of Russia and France.Conflictologist Elkhan Mehdiyev answered ASTNA’s questions about the developments at the border.

– Elkhan bey, what is happening on the Azerbaijani-Armenian border?

– State structures collapsed in Armenia. As they say, the only state institution used to be the army, which has now been destroyed by our army. Neither state structures nor the government work. Now they are on the verge of election chaos, and it is unknown what will happen after the election. Complete anarchy and instability there will continue for many years to come. For 28 years, they ruled over the exploitation of Azerbaijani lands through nationalism and fascism. It also broke up. What will happen now? Emigration and a situation in Somalia. Armenia is already a Failed State in the full sense of the word. This is at the highest level. Azerbaijan, on the other hand, is adjusting and correcting its borders with the melting of snow. Because instability will continue in Armenia for a long time. And we must fully protect our borders. Azerbaijan follows the official maps set and issued by the Soviet Union, and it has no eyes on the territory of Armenia, not even 1 meter.

– According to the November 10 declaration, Azerbaijan is restoring its internationally recognized borders. But why is Armenia so worried and why does it start an uproar? What is Armenia worried about?

– You know, Armenia has been holding these lands for 28 years and considered these lands as its own. They say that our borders were 200 km away from us six months ago but now they have entered our villages. They showed the same hysteria when we defined the borders in Zangilan and Gubadli districts. But at that time, the government did not go in front of the crowd. Now the elections are coming in Armenia in a month. Pashinyan is also reluctant to protest due to the election. Why reluctant? Because he himself knows that the demarcation of borders is a guarantee of Armenia’s security and he has repeatedly stated this correctly. But his opponents have already accused him of demarcating the border and saying, “Pashinyan will hand over Syunik to Azerbaijan,” and drove him into a corner. Furthermore, the Armenians have been living with the idea that all these lands, which have been occupied for 28 years, belong to Armenia, and they have accepted this as a fact.

Armenians living in the border areas lived mainly on Azerbaijani lands. They cut down all the forests, lived in our gardens, planted grain in the fields, and used the pastures and winter pastures for cattle. Now all this is lost, and the last points are also lost. Imagine that an Armenian living in the border village with Zangilan says that my job was to get up every morning to cut down trees and sell firewood in the forests of Zangilan. Now I have nothing to do, and tomorrow I will just wake up and look at those forests… Agriculture and livestock have been destroyed. Because this infrastructure was built in the occupied territories for 28 years. Now they are deprived of all this and are shouting. Do you think that the Armenians, who have been the owners of these lands for 28 years, will change in two months? Moreover, such behavior has become a culture in the Armenian nation.

– What happened at the border comes after the visit of the Minister of Foreign Affairs of Russia, Sergey Lavrov, to Yerevan and Baku. Is it possible that Lavrov could not agree with Armenia on some issues and now uses the border issue as pressure on Armenia?

– First, I do not think that Azerbaijan defines its borders in connection with Lavrov’s visit. However, Lavrov was also aware of the existence of these problems, and he himself said that all these issues were solvable. From this point of view, Azerbaijan offered the Armenian side to go to the talks and act on the basis of documents, and the talks have been going on for several days on the basis of these maps. Of course, our maps are all maps issued in Moscow at that time. And here one party has no chance to deceive the other or to deceive with a fake map. All these maps are in Moscow.

– The OSCE Minsk Group has long lost its significance for Azerbaijan. We are not witnessing the amateur actions of French President Macron only in our region. Whatever he did, he failed. His attempts to form a coalition against Turkey over the disputes in the Mediterranean, the role he wants to play in Libya, his views on Islam, his statement on the brain death of NATO, or his attempts to pit Turkey and Greece against each other are indicators of Macron’s complete bankruptcy. His direct position in the 44-day war decided the fate of the OSCE Minsk Group. In this regard, the Minsk Group was paralyzed not by Azerbaijan but by its co-chair like France.

– What steps should Azerbaijan take in this matter? Should it back down, or should it work to ensure border inviolability to the end, despite international pressure?

– There is no international pressure here. Everything is clear with France. On the other hand, the US government is now dominated by people who have long received financial and electoral support from Armenian lobby groups. As they have always admitted, no other argument put forward by Azerbaijan makes sense to them. They are now just making statements made by the Armenian National Committee in America. In this regard, the US government’s statement on the border incidents is a statement that undermines the credibility of the US government, which is unaware of the issue. I think that this statement was made on the basis of the text written by the above-mentioned Armenian National Committee.

Here, as France and the United States have no influence on the situation in the region, it is clear that they want to draw attention to themselves by making such provocative statements. But there is no place for the United States or France. Russia’s role here is quite natural because the territories were specified and mapped by Moscow during the Soviet era, and the maps of the USSR Committee of Ministers and the General Staff are the main ones. And the Russian military delegation is also participating in the talks, and if Azerbaijan was wrong, it would probably have protested a long time ago. It is not a question of whether someone is right or wrong. The work here is based on the official maps of the Soviet era, and the map solves the problem. For example, if Azerbaijan entered the territory of Armenia, the issue of its withdrawal would never be the subject of negotiations. Because it is Russia, not the United States, that is responsible for the alliance. It turns out that Russia, which is involved in the process, says that the issue is simply a matter of delimitation and demarcation, which has never been done before. So, are France and the United States, unaware of this issue, accusing Azerbaijan of provocation and, moreover, calling for an immediate withdrawal from these lands? Yes, let’s say we withdrew. Then, will the United States come and demarcate the Azerbaijani border? Or will the Armenians come and put a border wherever they want? This is the reason why Armenians are hysterical. “Because they say their border passed through Fuzuli. They say they used to turn out their sheep in Gorus and go and bring them from Jabrayil.” Apparently, the United States wants those borders. Because the United States itself has been helping to keep the borders that way for 28 years. Has it once told Armenians to leave Azerbaijani lands in 28 years? On the contrary, despite being an aggressor, Armenia ranked first in the world in terms of per capita financial assistance from the United States. The United States was the only country in the world to provide direct financial assistance to the regime in Nagorno-Karabakh.

Such events will no longer take place. The Azerbaijani soldier put an end to this issue. 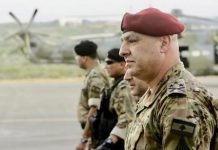 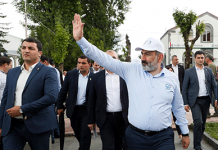