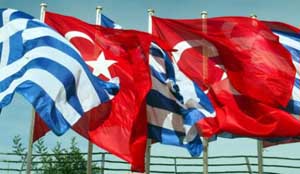 The fourth round of meeting on confidence-building measures between the delegations of the Turkish and Greek defense ministries will be held on May 26-27 via video conference, the Turkish Defense Ministry has said.

The two neighbors have long been in dispute for their territorial claims in the Aegean Sea as well.

The Turkish and Greek military officials launched talks to reduce the risk of conflict and accidents in the Aegean and Mediterranean under NATO auspices after months of tension. The two neighbors also resumed political discussions to resolve their differences.

“We will have a meeting with our Greek counterparts within the framework of confidence-building measures, albeit from a distance. We will once again express that we are waiting for them for the fourth meeting to be held in Ankara,” Defense Minister Hulusi Akar told reporters last week.