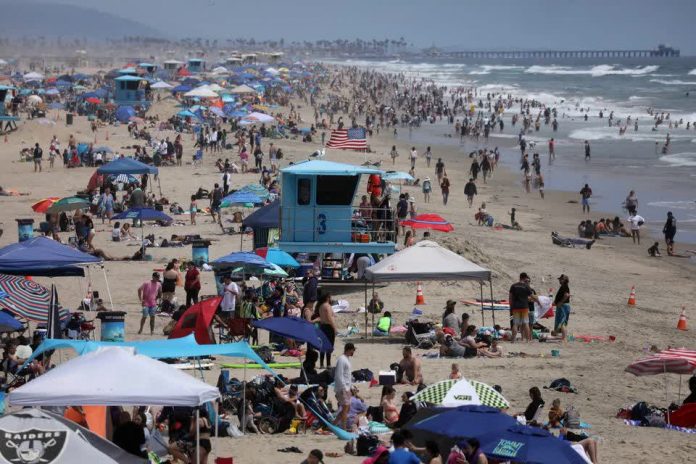 People flock to the beach to enjoy the Memorial Day long weekend, in Santa Monica, California, U.S. May 30, 2021. REUTERS/David Swanson

With half the country at least partially protected against the coronavirus, Americans escaped their pandemic doldrums over the three-day holiday weekend that traditionally unleashes the country’s pent-up wanderlust at the doorstep of summer.

A year after Memorial Day weekend travel was depressed by fears of the spreading virus, Americans took to the skies and roads.

United Airlines (UAL.O) said it was forecasting Monday to be its busiest travel day since March 2020. For the five-day holiday period, it was forecasting 1.34 million passengers – but still down from 2.3 million over the same period in 2019.

Patty Doxsey, 63, of Red Hook, New York, was set to take a 10-hour drive with her husband on Monday for a week-long camping stay at Great Smoky Mountains National Park in Tennessee in hopes of seeing a synchronous firefly light show.

The couple, both vaccinated, had planned to go last year until the pandemic scotched their trip, she said.

“I am so excited,” said Doxsey, a reporter for the Daily Freeman in Kingston, New York. “It has been a long, long year, and we like to travel.”

By Sunday, 50.5% of Americans had received at least one dose of a COVID-19 vaccine, according to the U.S. Centers for Disease Control and Prevention.

The number of new coronavirus cases plummeted from a seven-day average of more than 250,000 a day in early January to about 18,900 on Saturday, the lowest number since the emergence of the pandemic in March 2020, the CDC said.

The Memorial Day holiday on Monday is also a solemn occasion for remembering the country’s war dead, and many of this year’s military ceremonies were still being held virtually.

The biggest commemoration, the National Memorial Day Parade in Washington, which was presented online last year as the virus raged, was returning somewhat back to normal this year with a mix of in-person and virtual events, organizers said.

Instead of a traditional parade on Constitution Avenue, the march was filmed on May 3 on the National Mall with no onlookers and will be blended with other taped performers in a special television program.

“We’re fully expecting to be returning to normal next year,” said Kenny Cunningham, a spokesman for the American Veterans Center, a non-profit educational organization.

President Joe Biden and Vice President Kamala Harris took part in a traditional wreath-laying ceremony at the Tomb of the Unknown Soldier at Arlington National Cemetery in Virginia.

“Duty, honor, country – they lived for it, they died for it. And we, as a nation, are eternally grateful,” Biden told the crowd, including families gathered to remember loved ones who lost their lives in military service.