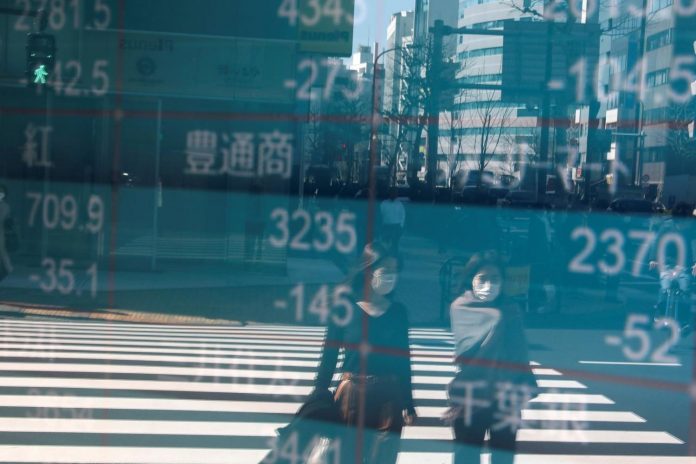 SINGAPORE (Reuters) – Asian stock markets rose on Tuesday while gold flirted near five-month highs ahead of European and U.S. data this week that will likely offer clues on the health of the global economy.

FILE PHOTO: People wearing protective face masks, following an outbreak of the coronavirus, are reflected on a screen showing Nikkei index, outside a brokerage in Tokyo, Japan February 28, 2020. REUTERS/Athit Perawongmetha

China’s factory activity expanded at the fastest pace this year in May as domestic and export demand picked up, though sharp rises in raw material prices and strains in supply chains crimped some companies’ production, a business survey showed on Tuesday.

South Korea’s index jumped 0.8% and led regional gains after the country’s exports logged their sharpest expansion in 32 years in May, marking another robust month of shipments fuelled by stronger consumer demand globally. [L2N2NJ009]

The MSCI Asia index rose to the highest in a month, taking total gains made so far this year to nearly 7%. World equities have risen for a fourth straight month as ample liquidity supported risk taking despite worries of higher inflation.

U.S. stock futures were little changed after a holiday on Monday and following European share markets ending below record highs.

While asset markets have rallied last month, policymakers are increasingly focused on tackling inflation at a time when the underlying structural economy has been struggling to gain traction.

“The fixation of the markets now is on inflation and rightly so because of so much of quantiative easing and supply chain disruptions,” said Hou Wey Fook, chief investment officer at DBS Bank.

The main event of the week will be U.S. payrolls on Friday with median forecasts at 650,000, but the outcome is uncertain following April’s unexpectedly weak 266,000 gain.

Though U.S. inflation data last week was above estimates, another big miss on the jobs front would put pressure on the Fed to postpone plans to wind down its stimulus, analysts say.

The dollar languished near multi-month lows versus major peers as traders pondered the prospects for early policy normalisation by the Federal Reserve ahead of the jobs report. [USD/]

Up next, the Reserve Bank of Australia is widely expected to remain on hold and maintain a dovish bias at Tuesday’s policy review.

Concerns about global inflation have supported gold, with prices for the yellow metal rising 8% this month, vaulting comfortably above $1,900. On Tuesday, gold prices traded near a five-month high scaled last week. [GOL/]

Oil prices rose ahead of an OPEC+ meeting and on optimism that fuel demand will grow in the months ahead with the summer driving season starting in the United States, the world’s top oil consumer. [O/R]

There was little action in cryptocurrencies, with bitcoin steady around $37,000.