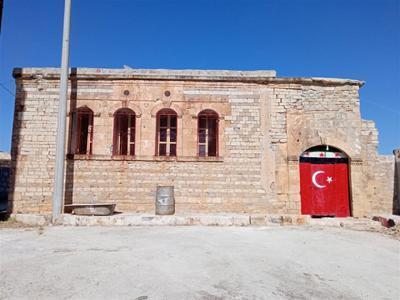 A house that Mustafa Kemal Atatürk, the founder of modern Turkey, used as his military headquarters in Syria’s northern province of Afrin during World War I will be renovated and turned into a museum.

“The house has already been cleaned, and a project to restore and turn the house into a museum has been prepared,” the Hatay Governor’s Office said.

Located in Afrin’s Raju district, the house was used as a military quarter by Atatürk during the Battle of Katma, where he is believed to have determined the military strategy and roadmap of the successful action.

The house was discovered in 2018 during Turkish forces’ security checks.

The Battle of Katma was fought in 1918 when Prince Feisal’s Sherifial Forces captured Aleppo during the Pursuit to Haritan from Damascus in the last days of the Sinai and Palestine Campaign in World War I.

In the face of the onslaught of greater numbers of British divisions and Arab tribes, Atatürk had to withdraw his headquarters and troops further north, without much hope of holding anything south of the Taurus Mountains.

Nearly 100 years after the fallback, Turkish soldiers reentered Afrin, launching an operation this time to remove PKK and ISIL terrorists in the region.

On March 18, 2018, Turkish troops and Free Syrian Army members liberated the town of Afrin on the 58th day of Operation Olive Branch.

Turkey has been carrying out countless restoration and infrastructure projects in the region to facilitate the return of refugees to their homes following a series of successful counterterrorism operations.