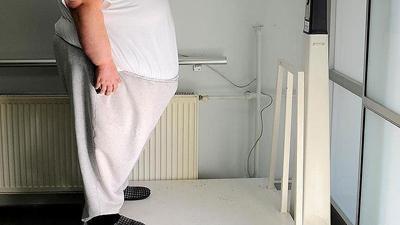 The obesity prevalence rate in Turkey has increased significantly in the COVID-19 era, turning the problem of overweight into a “pandemic,” a report prepared by a parliamentary commission has revealed.

People spending more time at home because of lockdowns and other restrictions is the main reason behind the increasing prevalence of obesity across the country during the pandemic, the report found.

One out of three people in Turkey is obese, according to the report prepared by the Petitions Commission’s Obesity Sub Commission following months of work.

In 2008, only 15 percent of the population was overweight but the obesity rate among the public increased gradually in the coming years, climbing to 19.6 percent in 2016 and further to 21.1 percent in 2019.

In 2008, only 15 percent of the population was overweight, but the obesity rate among the public increased gradually in the coming years, climbing to 19.6 percent in 2016 and further to 21.1 percent in 2019.

However, the latest report determined that the obesity rates vary among regions, with western regions showing a higher prevalence of obesity among people than the eastern regions.

The Western Black Sea region topped the list with 37.5 percent of the population being obese, followed by the Central Anatolian region at 36.9 percent.

In Istanbul, the country’s largest city, 30.7 percent of the population is obese.

Some 39.1 percent of women and 24.5 percent of men are suffering from obesity in Turkey, according to the report.

“Obesity is higher among women because of lack of physical activity, psychological problems, low income and low education level,” according to the study.

The increase in the obesity rates is now considered a “pandemic,” the report concluded.

The COVID-19 pandemic kept people at home, which meant less mobility and physical activity, leading to obesity. But it also caused an increasingly obese population by hindering their efforts to fight against obesity.

The pandemic conditions make people want to stay away or avoid hospitals. In 2019, more than 285,000 people went to hospitals to receive nutrition therapy. But this number dropped sharply to around 140,000 last year when the pandemic gripped the nation.

Highlighting that the health expenditures of people suffering from obesity are 2.5 times higher than healthy individuals, the report projected that obesity-related spending would account for 12 percent of all health expenditures in Turkey in the near future.

The report outlined that stress, a sedentary lifestyle and technology, such as smartphones, TVs, computers, tablets and elevators, which reduce mobility and physical activity, as well as consumption of high-fat fast-foods were the main reasons behind the rising obesity rates.