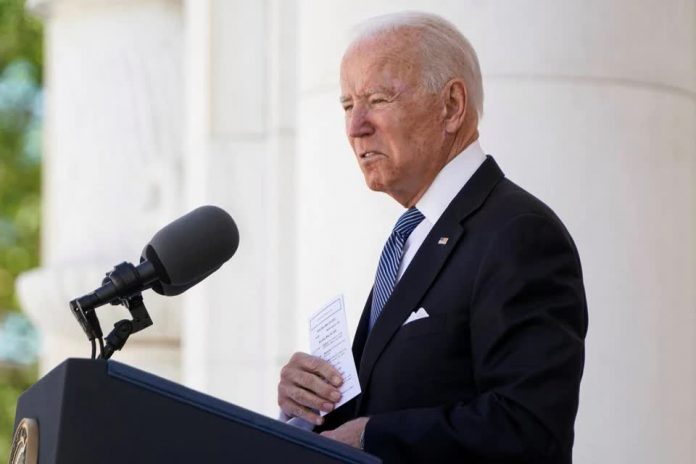 U.S. President Joe Biden puts a note with the number of U.S. soldiers killed in Iraq and Afghanistan is his pocket as he delivers the Memorial Day speech

U.S. President Joe Biden used his Memorial Day speech on Monday to defend America’s “imperfect” democracy, calling for more work to deliver the promise of what he said remained “the greatest experiment” in world history.

In a speech at Arlington National Cemetery touching on voting rights, freedom of speech and efforts to rectify persistent economic and racial disparities, Biden warned that democracy was “in peril” in the United States and around the world in the face of autocratic forces he did not identify.

“Democracy is more than a form of government, it’s a way of being, a way of seeing the world. Democracy means the rule of the people,” Biden said in a speech to honor one million Americans who have lost their lives in military service.

Speaking in the largely empty Arlington Memorial Amphitheater with the nation still in the grip of the coronavirus pandemic, Biden said 7,036 people had died in recent U.S. conflicts in Iraq and Afghanistan, serving the ideals of the United States and democracy as a vibrant form of government. “They lived for it, they died for it,” he said.

“We owe the honored dead … our full best efforts to perfect the Union for which they died.”

Biden has announced plans to withdraw U.S. troops from Afghanistan this year after the longest ever U.S. overseas engagement. He has also pointed to what he has describes as autocratic rule in China and Russia as major challenges faced by the United States.

As many U.S. states work to pass laws that critics argue are intended to suppress minority voting, Biden also stressed the need for people to have the right to vote “freely and fairly and conveniently” and for the rule of law to apply “equally and fairly to every citizen, regardless of where they come from, what they look like.”