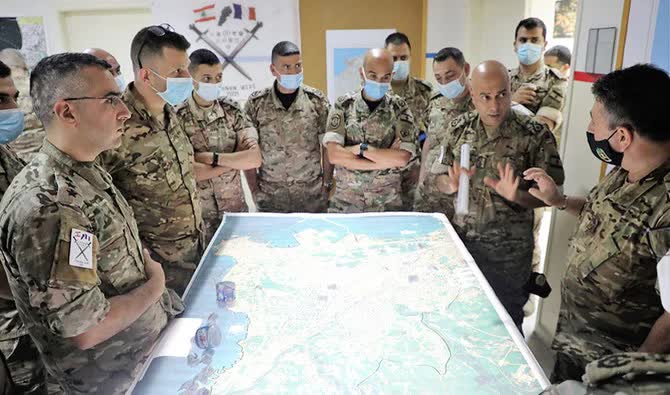 The Lebanese army announced that it was carrying out the ‘Lebanon Wide’ military exercise on Monday. (Supplied)

BEIRUT: Lebanon’s army carried out large-scale military exercises on Monday to test its readiness to deal with a nationwide crisis.

The “Lebanon Wide” exercise included units from the army, the Internal Security Forces, General Security, State Security, the General Directorate of Customs, the General Directorate of Civil Defense, the Lebanese Red Cross, UNRWA, UNHCR, along with French experts and officers.
The exercise assessed the capability of units to coordinate missions with security forces, and local and international NGOs during a national crisis.
It comes as Lebanon confronts an economic collapse, with the absence of a rescue government, and mounting anger among Lebanese forced to endure long queues outside gas stations, pharmacies and supermarkets.
In a new attempt to resolve the obstacles facing the formation of a rescue government, Speaker of the Parliament of Lebanon Nabih Berri met on Monday with Prime Minister-designate Saad Hariri.
Hariri did not release a statement at the conclusion of the meeting.
Berri’s office said that the meeting “lasted for two hours, during which the government issue was discussed.”
It said that there was discussion “about the path of forming the government and the steps that had been made, and the atmosphere was positive.”
Berri is seeking to mediate with Lebanese President Michel Aoun and Hariri to agree to form a government of 24 ministers, with no “obstructing third” for any party.

On Oct. 22 last year, the majority of the country’s parliament mandated Hariri to form a new government, and he submitted a draft formation of 18 nonpartisan ministers to Aoun, but it was rejected by the president, who demanded that Hariri personally nominate Christian ministers and employ an obstructing third in the prospective government.
Aoun called parliament to discuss the naming of a prime minister other than Hariri, but on May 22, the parliament affirmed its commitment to assign Hariri unanimously.
Future Movement MP Rola Al-Tabash said: “The chances of forming a government are almost equal to the possibility of obstructing it.”
She added: “There is a side led by the prime minister-designate striving to overcome all obstacles, internally and externally, and another side led by a presidential obsession that creates all obstacles to perpetuate the constitutional distortion, political rifts and social exhaustion.”
Amid the economic crisis, prices of food such as beef and chicken have risen steeply in Lebanon, leading to a crisis among consumers.
Only eight food commodities remain subsidized by the state, with policies in the past covering subsidies for more than 100 common food products.
On Monday, a financial source told Arab News: “The caretaker government does not want to bear the responsibility for lifting subsidies on food commodities, for fear of the security and social repercussions.”
The decision is the responsibility of the government and the Banque du Liban, Lebanon’s central bank, said the source.
“However, in light of the government’s reluctance to swallow this poison, the central bank slowed down the process of supplying traders and importers with fresh dollars — required for importation — to match the official exchange rate of 1,500 Lebanese pounds ($1) to the dollar, and this is what we have seen recently in the issue of fuel and medicines,” the source added.
American University’s Crisis Observatory said the government “has refrained from presenting policies and programs to address the economic, financial and living crisis, except for the decision to refrain from paying eurobonds in March 2020.”
The financial source also warned that due to entanglement, the bread industry “will be affected by the removal of fuel subsidies.”
Also on Monday, Asaad Bayram, Beirut investigate judge, finished questioning lawyer Rami Aliq over the offense of defaming the judicial authority and threatening the Public Prosecutor at the Court of Cassation, Judge Ghassan Oweidat.
Bayram ruled to “prevent Aliq from practicing the profession of attorney and entering the justice palaces for two months, and to make him pay a fine instead of arresting him.”
The decision came following Aliq’s work as an activist group supporting the Free Patriotic Movement (FPM).
The FPM supported Judge Ghada Aoun when she stormed the Mecattaf Money Transfer Company — in violation of a judicial decision preventing her from handling a file concerning currency export breaches, which she was investigating.
Aliq went on a hunger strike to protest his arrest, labeling it “a violation of the immunity the legal profession affords him.”
He said that he was “subjected to flagrant violations of the constitution and the charter of human rights, and that he is a prisoner of conscience.”
Many lawyers supporting Aliq gathered in front of Judge Bayram’s office inside the Palace of Justice in Beirut to protest against his treatment.