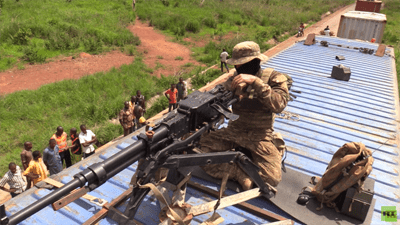 After a decade of fighting warlords and lawlessness, the Central African Republic is building up a capable military to achieve long-desired peace – and Russian instructors, exclusively interviewed by RT, are key to that mission.

A bloody civil war has been raging in the Central African Republic (CAR) since 2012. The country, which gained independence from France in 1960, has had a tumultuous history of various factions seeking to usurp power, and the violence in the resource-rich nation has dragged on well into the 21st century. When the CAR’s president, Faustin-Archange Touadera, requested Moscow’s assistance in 2018, his government had control over just a small part of the country’s territory, while the rest was claimed by warlords and their gangs.

With the approval of the UN Security Council, Moscow began sending light weapons and instructors to train the army. The outside backing was a game changer, as the authorities in Bangui now say that 90% of the country answers to them.

RT’s Konstantin Rozhkov traveled to the CAR to take an exclusive look at the work done by the Russian instructors and the dangers they face every day on their mission. He met with Aleksandr Ivanov, the spokesman for the official Russian contingent, who told Rozhkov that their task was a tough one from the start. At the time when the Russians arrived, some of the local troops “couldn’t disassemble an assault rifle and had no idea how to aim,” Ivanov said.

The CAR, which boasts vast deposits of diamonds and gold, is still a long way from being a peaceful place.

“Today the armed forces of the Central African Republic, along with their allies, the Russian Federation and Rwanda, are engaged in a counter-offensive to put an end to this campaign of destabilization,” President Touadera told RT.

The militants have not been crushed entirely, but have retreated into the jungle and switched to guerrilla tactics. Armed with automatic weapons and rocket launchers, they attack remote villages, military checkpoints, and civilian convoys. The daily duty of the 500 Russian specialists in the CAR includes helping the forces secure the ‘Route of Life’. “Most of the food and essentials are being supplied to the country” through this road, leading to the border with Cameroon, one of the instructors, who asked not to be named for security reasons, told Rozhkov.

RT’s crew joined the Russian instructors on a mission to escort a convoy along this key artery. The loaded trucks were organized at an outpost on the Cameroon border and then driven further inland under armed protection. The mandate of the instructors only allows for them to open fire in self-defense, Ivanov said. Attacks on the convoys happen quite frequently, with burned vehicles frequently spotted on the roadside, and a crack in the window of a bulletproof SUV that the crew was traveling in, serving as a daily reminder. An instructor recalls: “We were fired upon from the bushes with an assault rifle and a grenade launcher. But they missed.”

After visiting the base and interviewing some of the soldiers working with the Russians, RT’s crew set off for a gold mine deep in the jungle, and to film in villages recently recaptured from the militants, which could only be reached by helicopter. During the flight, the pilots kept a supply of hand grenades at the ready to scare off the militants in case they start firing at the aircraft.

The poverty and devastation filmed in the remote CAR settlements have an even more horrifying backstory – the militants who controlled this area have forced the villagers to work in the gold mine as slaves, killing those who refused to work or were too exhausted to carry on. People still hide when they see an armed unit approaching, before realizing they are government troops.

Getting to the gold mine itself remains a dangerous ordeal as the militants sometimes reemerge from the jungle and plant landmines on the road, hoping to loot any vehicle that sets off an IED. RT’s crew encountered one such surprise from the militants, but the mine was spotted in time and detonated in a controlled blast.

The locals say that they see the Russian specialists as their protectors, with one villager explaining they have never offended or harassed anybody. When asked about his mission, one of the Russian instructors told Rozhkov that he was helping “the good” prevail, “assisting a nation in a difficult situation when people need protection.”

“The only problem we have with the Russians is that they haven’t showed up in these parts for a long time,” a villager said. However, the Russian contingent is simply not large enough to secure the whole of the CAR – this is the job of the troops they’re helping to become battle-ready.