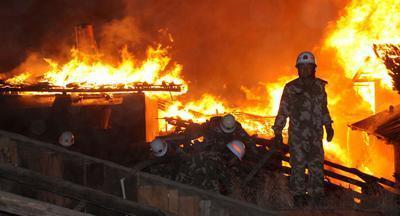 Scientists from Tomsk Polytechnic University (TPU) were able to improve industrial methods of spraying water by creating a complete mathematical description of this process.

According to the scientists, the data obtained will help improve fire extinguishing techniques, as well as a number of processes in the petrochemical industry. The results were published in the Powder Technology academic journal.

Spraying water with various impurities and its subsequent evaporation is an important part of many technologies applied in the petrochemical industry, the TPU scientists said. However, according to them, such systems have a low degree of efficiency, which affects the cost of production.

For example, in thermal treatment chambers, where byproducts are separated, relatively large drops of an aqueous solution do not have enough time to evaporate during one operation cycle, which significantly reduces efficiency and increases time consumption.

As the scientists assume energy and resource consumption can be optimised by spraying liquid under special conditions in which it will be impossible for large droplets to form. The exact mathematical parameters of such a process are provided in the new research conducted by the TPU physicists.

“Crushing droplets of liquids, emulsions, solutions and suspensions can multiply the surface area of their evaporation. Using this effect along with changing the design and position of the sprayers, it is possible to significantly increase the efficiency of a large number of systems, from fire extinguishing to thermal energy using water vapour,” Pavel Strizhak, Professor of TPU, Doctor of Physical and Mathematical Sciences, explained.

The data obtained, according to the authors of the research work, will help significantly increase the thermal power of combustion engines and boiler furnaces, as well as raise heat absorption in heat exchange systems by three to five fold. In the long run, this will also make it possible to optimise the dimensions of the combustion chambers, heat and mass transfer devices and the entire set of the other elements of heat and power systems.

Another area that will be significantly affected by the results of the research is the environmentally friendly power developing industry, the TPU scientists believe. According to them, today, the systems are being actively implemented which allow capturing hazardous products of combustion of hydrocarbons by using water and water vapour, preventing their release into the atmosphere.

“We have determined the transformation and decay time of droplets under the action of aerodynamic forces and for the first time have found the exact values of the critical criterion for the Weber and the Reynolds number, taking into account the capillarity and the Ohnesorge and Laplace numbers. This makes it possible to mathematically describe the entire process of crushing drops and make adjustments to the existing methods of spraying,” Ivan Voytkov, one of the authors of the research, and a invited research engineer at TPU, said.

According to the scientists, the new experimental data are highly accurate, since the crushing of drops was first studied in the dynamics of a real air flow, for which video recording was used at a frequency of up to 100,000 frames per second. Water-containing mixtures of various compositions used in the industry were analysed as well.