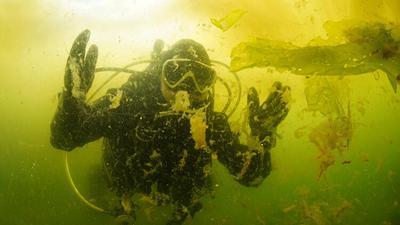 Marine mucilage that has invaded Turkey’s Marmara Sea continues to be a grave threat despite comprehensive cleaning efforts, threatening the fishing industry and marine biome considerably, according to the latest exploration studies carried out on the surface and bottom of the sea by an expert. Caused by the over-reproduction of certain types of microalgae, sea snot has severely hurt the fishing industry in the region and is now threatening the marine ecosystem of the Marmara Sea in a way that cannot be avoided. Mustafa Sarı, the dean of Bandırma Onyedi Eylül University’s Marine Faculty, dived 18 meters deep off Balıkesir’s Erdek district, a coastal town in the south of the Marmara region, to record the presence of mucilage at the bottom of the sea. “I dived myself today. I descended from the shore to a depth of 18 meters. Unfortunately, the formation of mucilage continues. The bottom of the sea is covered with mucilage,” Sarı tweeted on May 31, sharing a photo showing the bottom of the sea. While diving to the point where the visibility dropped to one meter, the academic with his cameras recorded how mucilage covered corals, starfish, crabs, mussels and other sea creatures like a layer of fog. Sarı said the mucilage density seen on the sea’s surface was like the tip of the iceberg, stressing that the main danger was at the bottom of the sea. “There is no reduction in the production [of mucilage] underwater. When we three divers went down, we could hardly see half a meter with flashlights. Visibility was zero,” he noted. Marine mucilage is a goopy discharge of protein, carbohydrates and fat from microscopic algae called phytoplankton. The substance was documented in the Marmara Sea for the first time in 2007, as researchers at Istanbul University reported in 2008. This year’s event, the largest yet seen, began in deep waters in December 2020 and was initially only a nuisance to fishermen who were unable to cast their nets since the mucilage appeared. According to Sarı, an increase in the seawater temperature has worsened the phenomenon. The academic also noted that the Marmara Sea is 2.5 degrees warmer, which is above seasonal averages. The dean underlined the necessity of taking precautions today to avoid encountering a vast, frequent and intense production of sea snot next year. “We need a new waste management policy. We should no longer leave even one liter of waste in the Marmara Sea without treatment. The sea is helpless,” Sarı said.