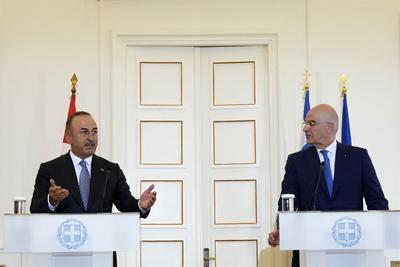 Turkey and Greece have reached an understanding on 25 articles to improve economic and commercial ties, and both countries will recognize each other’s COVID-19 vaccinations in a move to help tourism, Foreign Minister Mevlüt Çavuşoğlu said on May 31.

“As Turkey, we are ready to meet and have a dialogue with Greece to improve our relations in every field without any preconditions,” he said, speaking at a news conference with his Greek counterpart, Nikos Dendias, in Athens.

Çavuşoğlu stated that during the meetings with Greek Prime Minister Kyriakos Mitsotakis, Dendias and delegations, they discussed relations comprehensively, evaluated and consulted on regional issues.

“We have now started to work on concrete projects with a focus on action and cooperation. We have reached a consensus in principle on 25 items. Our relevant institutions will come together in the next period for many areas of cooperation from transportation to energy and from tourism to environment and trade,” he said.

Turkey and Greece have mutually decided to recognize COVID-19 certificates for travel purposes, the minister noted.

“I believe that the agreement we reached today will have a positive effect on our tourism sector. We want to increase these positive steps in the coming period, especially in terms of tourism cooperation,” he added.

Çavuşoğlu said Turkish President Tayyip Erdoğan and Mitsotakis were planning to meet at the NATO summit in Brussels on June 14.

He emphasized that they want the long-awaited issues and differences of opinion to be resolved based on good neighborliness, international cooperation and respect for mutual rights and interests.

Çavuşoğlu noted that the 63rd round of consultations will be held in Turkey and that they would make date proposals to the Greek side as soon as possible.

Dendias, for his part, pledged to work to overcome “serious differences” that remain with Turkey.

Dendias stated that Turkey and Greece have “serious differences” and that they aim to reach the first understanding to help resolve these problems.

“The purpose of today’s meeting was to attempt an initial negotiation process, and if possible, then we aim to gradually move towards normalization with time. An economic cooperation program list has been agreed upon,” the minister said.

“We have agreed on mutual recognition of COVID-19 vaccine certificates. Citizens who have been vaccinated or tested negative will be able to visit both countries mutually. This will accelerate tourism activities between the two countries,” he added.

Turkey and Greece are in conflict over the maritime borders in the eastern Mediterranean as both accuse each other of violating their rights and international law. 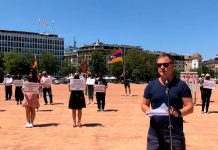