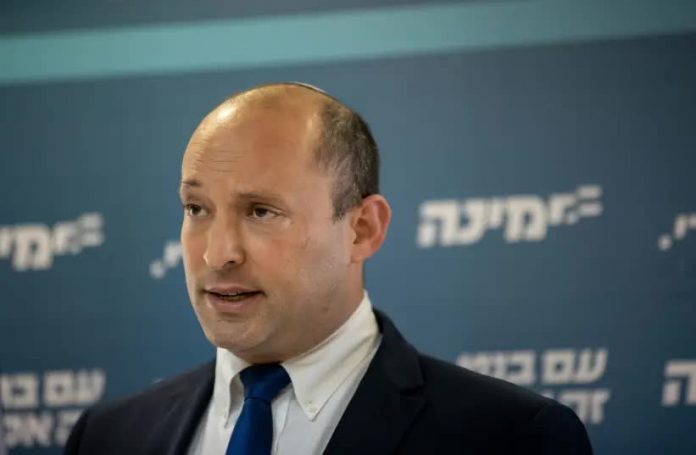 “Levin has the legal right to delay it by a week. It’s not playing a game with the law. It is understandable that we want to torpedo the formation of the government.”

Head of the Yamina party Naftali Bennett gives a press conference at the Knesset, the Israeli parliament in Jerusalem, on May 05, 2021.

Knesset Speaker Yariv Levin will likely use his legal right to postpone the special Knesset session for a vote of confidence and swearing in the new government for as long as possible, in an effort to prevent it from being formed, sources in the speaker’s Likud Party said Monday.

By law, once Yesh Atid leader Yair Lapid tells President Reuven Rivlin he can form a government on Tuesday or Wednesday, the special Knesset session can be held 24 hours after all the coalition agreements have been submitted.

Yamina would have liked the new government to be sworn in as soon as possible after that – ideally Thursday – to avoid unnecessary pressure over the weekend.

But Levin would consult with Prime Minister Benjamin Netanyahu and decide to use his right to delay the special Knesset session for seven days to maximize pressure on the parties forming the government, Likud sources said.

“Levin has the legal right to delay it by a week,” one of the sources said. “It’s not playing a game with the law. It is understandable that we want to torpedo the formation of the government.”

Asked when he would tell Rivlin he can form a government, Lapid said the deadline is Wednesday night, but he will try to finalize all the coalition deals sooner so he can tell Rivlin sooner. His associates denied a report that Lapid would go to Rivlin on Tuesday at noon.

There were no major stumbling blocks preventing the formation of a government, sources close to Lapid said. Progress was made with all parties that will be part of the coalition on Monday, including the Ra’am (United Arab List) Party of MK Mansour Abbas.

Blue and White and Yisrael Beytenu sparred over the Agriculture and Aliyah and Integration portfolios.

Yisrael Beytenu leader Avigdor Liberman complained to his faction that he had already sacrificed enough. He said Blue and White had agreed to give his party the Agriculture portfolio, and they could not have it back.

Liberman accused Blue and White leader Benny Gantz of “building an alibi” by engaging in a “holy war” over such a modest post.

In response, Blue and White said it was committed to the success of the new government being formed and “recommends to everyone to conduct their negotiations behind closed doors and not in unnecessary public statements.”

On Monday, Gantz said he needed to be rewarded for giving up the premiership, which he was set to receive in November, according to the previous coalition deal.

“Our faction is larger,” Gantz said at the Bar Association conference in Eilat. “I expect people to appreciate that.”

Blue and White is also complaining that it was given only one ministerial position in the security cabinet when other parties were given two.

There are also fights between Yesh Atid and New Hope over the Knesset speaker post and the Communications Ministry.

Former justice minister Ayelet Shaked requested that instead of Labor receiving the slot reserved for a minister on the Judicial Selection Committee for its leader, Merav Michaeli, and Yamina receiving the slot for an MK, Yamina would receive the ministerial slot for Shaked. But a source close to Shaked denied reports that the request was delivered as an ultimatum, and sources in both parties called the dispute solvable.

Another dispute revolved around a request from New Hope to split the attorney-general’s role into two separate posts.

Lapid downplayed the tension among the parties in the coalition he is forming, saying there are always negotiations ahead of a deadline, and he was sure compromises would be reached.

“If you want to know why we have to change the leadership in Israel, go and listen to Netanyahu’s speech, which was a dangerous and unhinged speech by someone who has no limits anymore,” Lapid told his faction. “There are still plenty of obstacles in the way of the formation of the new government. Maybe that’s a good thing because we’ll have to overcome them together. That’s our first test: to see if we can find smart compromises in the coming days to achieve the greater goal.”

There was significant progress in coalition talks overnight, a source in the change bloc said Monday morning.

The teams of Yesh Atid, Yamina, New Hope and Blue and White worked until after 3 a.m. and were continuing on Monday.

Meretz leader Nitzan Horowitz admitted that building such a diverse coalition would be a challenge. But it would be preferable to embarking on a fifth election, which would enable Netanyahu to remain in office, he said.

Michaeli told her faction she was proud that one of the portfolios her party would receive is the Diaspora Affairs Ministry. It was important to improve relations with progressive American Jews and the Democratic Party in the US, she said.

New Hope leader Gideon Sa’ar on Monday said any compromise with Netanyahu would have led to him remaining in power, even if Netanyahu would not have gone first as prime minister.

When he formed New Hope, he was committed to replacing Netanyahu, Sa’ar said, adding that he has kept that promise and that he will succeed. He quoted Menachem Begin, warning that a single party ruling too long leads to corruption.

Netanyahu’s Likud Party on Monday said in a tweet: “The Left failed to return to power for two decades, and then came Bennett and Gideon.”

“Many lofty words will not be able to hide the simple truth that Gideon and Bennett are trying to hide: It is possible to form a right-wing government in a short time, instead of galloping into a dangerous left-wing government. It’s not too late to recover,” Likud said.

The Shas Party echoed the Likud’s tweet in a statement a short time later, saying: “In light of everything that has been presented to us about the political events of recent days, we are convinced with absolute confidence that it is possible to immediately form a right-wing government of 65 MKs.”

Shas referred to a proposal that Sa’ar rejected the previous day, saying that “unfortunately, such a government has so far not been formed solely for personal reasons.”

Idan Zonshine contributed to this report