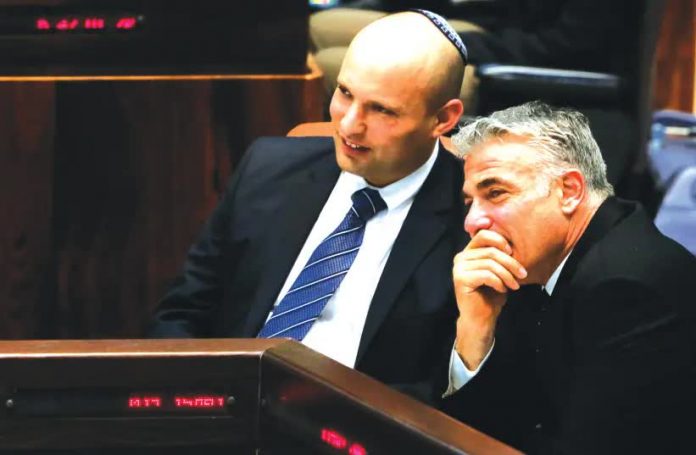 Would a government of Naftali Bennett and Yair Lapid really be a potential leftist disaster?

Efforts to form a government that would replace Prime Minister Benjamin Netanyahu carried over until the final day, after several small disputes between the parties remained unresolved on Tuesday night.

Representatives of the eight parties set to join the coalition and the heads of six of the parties came to Ramat Gan’s Kfar Hamaccabiah Hotel on Tuesday in an effort to work out their remaining differences before the end of Yesh Atid leader Yair Lapid’s mandate to form a government ends on Wednesday night.

Ra’am (United Arab List) head Mansour Abbas arrived at the talks and told reporters his party would formally be part of the coalition, though it would not take any portfolios. Hefty sums will go to infrastructure and fighting crime in Arab communities as part of the coalition agreement.

Lapid must tell President Reuven Rivlin and Knesset Speaker Yariv Levin by Wednesday night at 11:59 that he can form a government; otherwise, the mandate goes to the Knesset, where any MK has the option to build a coalition with the support of 61 MKs.

Once Lapid makes his declaration to Rivlin and Levin, there will be seven days to hold a vote of confidence in the Knesset and then swear in the new government.

Levin must formally announce in the Knesset that a government had been formed, which gave more impetus to the negotiating parties to resolve their differences before the Knesset plenum convenes at 11 a.m. on Wednesday.

Levin said he would only decide on the timetable for the vote after Lapid called him. But Likud sources said Levin would consult with Netanyahu, and they were very likely to decide to postpone the vote until the last day permitted by law to put more pressure on Yamina.

“I believe that with good will it is possible to conclude the negotiations and tell the president that the government can be formed,” Yisrael Beytenu leader Avigdor Liberman told participants at the Bar Association conference in Eilat on Tuesday afternoon.

Due to the threats to Yamina leaders Naftali Bennett and Ayelet Shaked, he sees “happening what everyone saw happen in the Capitol in Washington,” he warned.

“There won’t be anything like what happened at the Capitol,” he told the Knesset Channel. “We will respectfully go to the opposition.”

The Likud wrote to the legal adviser of the President’s Residence, Udit Corinaldi-Sirkis, questioning whether Yamina leader Naftali Bennett could be permitted to form a government during the mandate of Lapid.

In response, Corinaldi-Sirkis said the Knesset member entrusted with forming a government can serve as alternate prime minister, as Lapid will, according to the law.

“This is either a joke or just shameful,” he said.

The Likud also asked Corinaldi-Sirkis to require Lapid to tell the president the makeup of the coalition, whether it will be an alternating government and who will serve as alternate prime minister. Corinaldi-Sirkis accepted that request.

In a blow to Yamina, Roni Sassover, who was slated in the 13th slot on Yamina’s Knesset list in the March election, on Tuesday announced she did not support the formation of a government with left-wing parties.

Bennett is fit to lead the country, but the government being formed does not match her political worldview, Sassover wrote on Twitter.