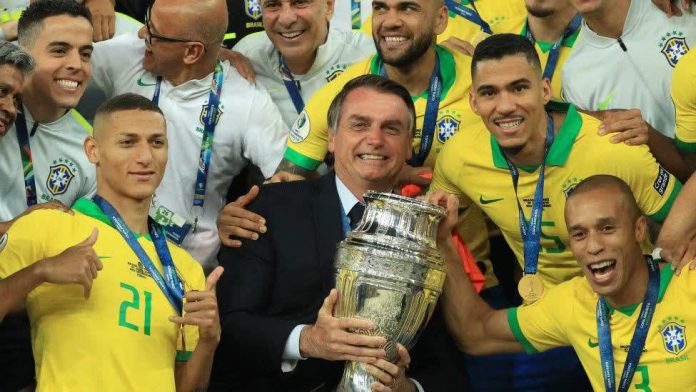 Brazil’s president has defended its hosting of the Copa America tournament despite the raging Covid pandemic.

There has been widespread criticism after the South American Football Association (Conmebol) announced on Monday that Brazil would be hosting the event, due to start next week.

A Supreme Court judge has ordered President Jair Bolsonaro to provide more information on the decision.

Brazil has been hit hard by the pandemic, with nearly 463,000 deaths.

Mr Bolsonaro said the decision was not up for discussion and that the tournament, which involves players across South America, did not pose a health risk.

He said on Tuesday that he had spoken with the health minister and they had agreed to host the event.

‘We have to live’

“As far as it is up to me, and all the ministers, including the health minister, it is all decided,” Mr Bolsonaro told his supporters in Brasilia.

“From the beginning I have said about the pandemic: I regret the deaths, but we have to live,” he added.

But the decision has been criticised by a number of lawmakers in the country.

“Neymar, I want to tell you something: You shouldn’t agree with the holding of this America’s Cup in Brazil! Don’t agree to this. It is not this championship that we need to now compete in. We need to compete in the vaccination championship,” he said.

The Supreme Court has given Mr Bolsonaro five days to submit information on the government’s decision to host the tournament after the opposition Workers’ Party filed a suit objecting to the tournament.

Mr Bolsonaro has announced that four states including Rio de Janeiro will host the matches however fans will not be able to attend. At least six states said they would not be hosting matches due to the pandemic, AFP news agency reports.

The Copa America was originally set to be co-hosted by Argentina and Colombia in 2020 but the tournament was pushed back a year due to the pandemic.

Colombia were removed as hosts last month amid widespread protests against the government, with Argentina later stripped of the role too due to rising Covid-19 cases.