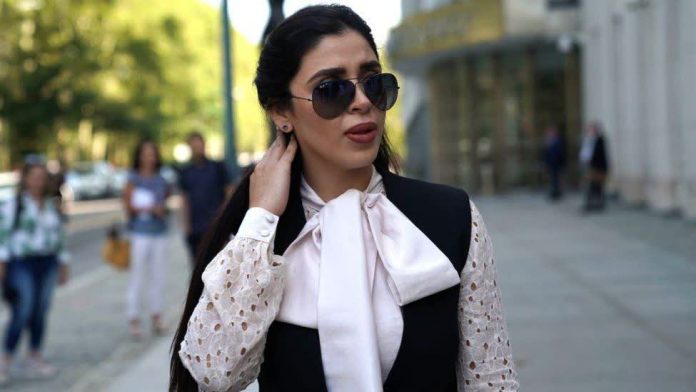 Emma Coronel Aispuro had a glamorous life in New York, enjoying the benefits of her marriage to drug kingpin Joaquin Guzman Loera, aka El Chapo. Then she was arrested, and thrown in a Virginia jail. What happened to the queen of the drug-cartel world?

The windows of the jailhouse, the William Truesdale Adult Detention Center in Alexandria, are rectangular slats, cut lengthwise into red brick and it’s where Emma Coronel Aispuro is held in solitary confinement, in a tiny cell.

Inside, says her lawyer Mariel Colón Miro, she reads novels, “romantic” ones, to pass the time.

The conditions of the jailhouse mark a sharp contrast with the life she once had.

A few months ago, she had plans to launch a clothing line, El Chapo Guzman. (The couple have style icon status in Mexico and his daughter has also made a foray into fashion using his name).

When I spoke with her in New York during her husband’s trial in 2019, she wore jewels, and an expensive watch.

Then earlier this year, Coronel, 31, was arrested at Dulles International Airport in Virginia and charged with helping her drug lord husband run the notorious Sinaloa cartel. Guzman, 64, is now serving a life sentence in a Colorado supermax facility.

FBI officials said Coronel conspired to distribute cocaine and helped plan her husband’s escape from a Mexican prison in 2015.

Her story is a personal one, with a cheating husband, a mistress and a criminal enterprise. Yet it sheds light on the secretive world of drug cartels, and the women who inhabit them. A date for a trial has not been set. If found guilty, she could be sent to prison for life.

Setting aside the question of guilt or innocence, analysts who study the drug-trafficking world say that Coronel carved out an unusual role for herself. She was a public figure, an entrepreneur, and a gatekeeper, helping to control who had access to her husband while he was running the cartel.

Traditionally, drug traffickers’ wives are seen as “very sexual” and with “no agency”, says Cecilia Farfán-Méndez, a scholar at University of California in San Diego. Coronel was different: “She showed that women can hold positions of power.”

Wielding power in a cartel is a risky undertaking.

Derek Maltz, a former special agent in charge with the US drug enforcement administration, says: “When you’re in this business, you’re either going to get caught or you’re going to get killed.”

Coronel put on a brave face, with her plans for a fashion company, but federal investigators were closing in. As Maltz says: “The world was collapsing around her, the walls were coming down.”

Coronel was dining on iceberg lettuce, chopped up, in the Federal District Court in Brooklyn, during her husband’s trial. She was sitting with friends in the cafeteria, joking about mothers, and how to deal with them.

“She has a big personality,” says Miro, her lawyer. “The Emma I know – she is full of energy, always smiling.”

Coronel, a citizen of both Mexico and the US, met Guzman when she was 17, and they were married soon after. They have two children, Maria Joaquina and Emali. During her husband’s trial, Coronel sat in the courtroom almost every day.

During breaks, she clattered in stilettos along marble hallways.

“A Sinaloa diva,” says Romain Le Cour Grandmaison, a Paris-based security analyst who has spent time in Mexico, studying the cartels. With red lipstick and in diamonds and tight jeans, she embodied the popular image of a “buchona”, a narco’s love interest.

She defines the term, buchona: “They wear very expensive clothes, Louis Vuitton purses. Everything is an exaggeration, and she’s a perfect representation of that image. It’s all about the look, the plastic surgery.”

One of her most striking features, noted Correa-Cabrera, is her “backside”, one that she described as “extremely curvy”.

Her glamorous image was in contrast to the grim reality of the operations of El Chapo’s cartel.

Guzman used violence to maintain control over the illegal drug market and reaped its rewards, bestowing riches on his wife and family. More than 300,000 people have been killed in Mexico since 2006, the year that the government launched its war on the cartels.

Victims included Guzman’s enemies, as well as individuals who were close to him. The body of one of his lovers was found in the trunk of a car, a murder that was reportedly carried out by a rival gang.

The price of loyalty

Lucero Guadalupe Sanchez Lopez, Guzman’s long-time mistress, testified against him during the trial. She was arrested in June 2017 on drug charges near the US-Mexico border.

She pleaded guilty, and was told she faced a decade in prison. Sánchez, a mother of two, co-operated with prosecutors as part of a plea deal.

Wearing a blue prison jumpsuit, she described their affair, and his work as a cartel leader, in the courtroom. She had a nervous tic, and blinked often. Guzman, sitting not far away, seemed impatient, and kept looking at a clock on the wall.

Coronel sat in the second row. She combed her long hair with her fingers, and that day wore a velvet smoking jacket, the same kind worn by her husband.

The matching jackets showed the strength of their marriage, says William Purpura, who served as Guzmán’s lawyer. Coronel wanted to send a message to Sánchez by wearing matching husband-and-wife outfits on the day the former mistress testified.

After speaking in court, Sánchez returned to her cell. Coronel headed off to dinner in New York City.

Not long after, the tables had turned for both women. Sánchez was released from prison and is now free. Coronel is behind bars and being held without bail.

Many were appalled at the way Coronel flaunted her lifestyle during the trial, and disappointed in the way she remained loyal to her husband.

Not by Sánchez, though.

When her lawyer, Heather Shaner, told her that Coronel was in jail, Sánchez showed no signs of schadenfreude.

Instead, recalls her lawyer: “She felt sad because, she said: ‘It’s just another mother who has to be away from her children.'”