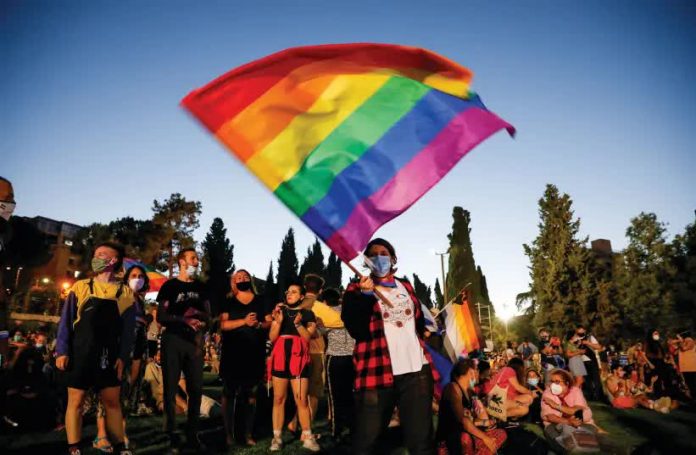 The survey noted that these sentiments are expressed by both left-wing and right-wing Israeli camps.

JERUSALEM PRIDE is back.

An overwhelming majority of Israelis believe that same-sex couples should be allowed to marry or register for civil unions in Israel, a recent survey found.

Some 73% of of the respondents in the countrywide survey expressed their support for LGBTQ+ Israelis being able to confer similar rights and obligations that married couples have in Israel by forming a civil union.

The survey noted that these sentiments are expressed by both left-wing and right-wing Israeli camps.

Among secular Israeli Jews, 93% support measures that would allow same-sex couples to carry out civil unions within Israel. Within the Zionist Orthodox sect, some 39% of respondents voiced support for the same – albeit a smaller portion.

By political affiliation, “70% of Likud voters, 85% of Blue & White voters, 65% of Yamina voters, 100% of Labor voters and 97% of New Hope voters,” would support a decision to allow for same-sex couple to form a civil union.

The survey also asked if respondents believe that same-sex couples should receive all the rights that married couples have, such as the right to surrogacy in Israel – instead of travelling abroad to do so.

Some 74% of the Jewish population believes that same-sex couples should have the same rights as all other married couples, meaning 3 out of 4 Israelis support equality for these couples.

“The opinion of the overwhelming majority of the public is clear. It supports equality for the LGBTQ community in general, and in matters of personal status and surrogacy in particular,” said CEO of Hiddush Rabbi Uri Regev, whose organization commissioned the research. “Equally important is the fact that this high level of support is held by all the voters for all the parties that are about to comprise the new government coalition [as well as Likud voters].

“If the Israeli government perpetuates discrimination against the LGBTQ community, it will not only betray the values of democracy and equality, but also its own constituents,” he added. “It’s high time that Israel get a government that upholds the promise of the Declaration of Independence for freedom of religion and equal rights for all.”

CEO of the Jerusalem Open House for Pride and Tolerance Alon Shachar said: “The survey findings are consistent with the feeling on the ground that Israeli society supports equality for the LGBTQ community. But the decisionmakers seem to be acting in a way that does not reflect the will of their voters and directly harms the LGBTQ community.

“We feel this when it comes to policy, legislation, and state budgets and allocations,” he added. “To make a real difference, we invite you to participate in the upcoming Pride and Tolerance Parade in Jerusalem. Join us in calling for equality.”