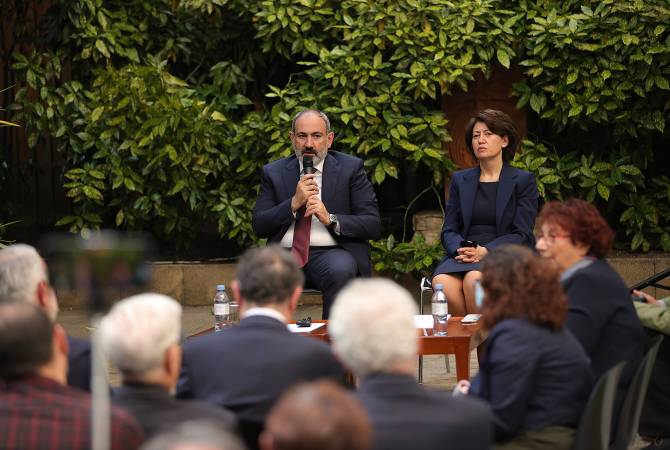 PARIS, JUNE 2, ARMENPRESS. During the meeting with the Armenian community of France at the Embassy of Armenia, caretaker Prime Minister Nikol Pashinyan presented details from his June 1 meeting with French President Emmanuel Macron, Armenpress correspondent reports from Paris.

According to Pashinyan, France is inclined to carry out an initiating policy for ensuring stability in the region.

“During today’s discussion I have recorded that President Macron is interested in and is inclined to carry out an active initiating policy so that the international organizations, including the OSCE Minsk Group, are more engaged in ensuring stability and security in our region. And several days ago I have made a concrete proposal during the session of the Security Council about overcoming the current situation, and today I have recorded that that this approach is acceptable for France”, Pashinyan said.

The caretaker PM informed that he has also discussed with President Macron what actions need to be taken to resume the settlement process of the Nagorno Karabakh conflict within the frames of the OSCE Minsk Group Co-Chairmanship.

As for Russia, Pashinyan said Russia is Armenia’s number one partner in the security field and is its strategic ally.

“We are in constant touch with our Russian partners. I had a phone talk with the Russian President yesterday [May 31] and can state that we, in fact, share the same approach over the solution of the situation that the Azerbaijani armed forces must pull back from Armenia’s border, and what is the border of Armenia. It is known to all, it is the administrative border of Soviet Armenia. And the administrative border of the Soviet Union in this case is the state border of Armenia. Moreover, in that section the state border in the Soviet times is demarcated and delimitated”, Pashinyan said.

He said Armenia’s position is clear – Azerbaijan must pull back its troops. Armenia expects that Russia will clearly formulate this position.

“Moreover, we do this by clearly recording that the maps we have, which were ratified by the seals of the Soviet Armenia and Soviet Azerbaijan, are identical to the maps existing in the Russian archives, and when this fact is recorded, Azerbaijan must pull back its troops from that sections. If they do not pull back after the recording of this fact it means that Article 4th of the CSTO must enter into force which calls that action as an aggression against its member state. And as a first step we expect that both Russia and the CSTO will clearly and publicly express a position over the matter. Our perception is that this situation must be solved through diplomatic means, we see this opportunity at this moment and will continue the efforts on this direction. There are CSTO working documents which have formulated the timetables and the procedures. And we hope that these procedures will launch in proper timeframes and will reach their logical solution”, Nikol Pashinyan said.