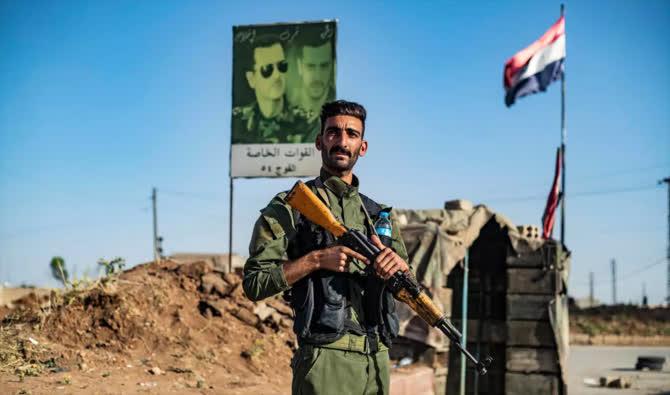 A member of the Syrian Kurdish internal security services known as Asayish stands at a joint checkpoint with Syrian government forces in the northeastern city of Qamishli. (AFP)

The violence broke out at a demonstration against military conscription and against a backdrop of growing anger over a deepening economic crisis which the area’s Kurdish leadership is struggling to contain.

The latest unrest comes weeks after similar riots gripped other parts of the autonomous zone Kurdish forces have carved out in northeastern Syria since civil war broke out in 2011.

In the Arab-majority region of Manbij, which was captured by Kurdish forces five years ago, “six protesters have been killed in the past 48 hours from live rounds fired by internal security forces,” known as the Asayish, said the Britain-based Syrian Observatory for Human Rights.

Demonstrators initially took to the street to demand an end to forced military conscription.

But the protests swelled after one of their number was shot dead on Monday.

Protesters blocked roads and attacked an Asayish checkpoint outside Manbij on Tuesday, the observatory said, prompting forces to respond with live fire.

The Manbij Military Council, a governing body linked to the Kurdish administration, blamed the violence on “criminal cells receiving their orders from external and domestic forces,” a likely reference to the Syrian government and Turkey.

It accused instigators of using the issue of military conscription — which has been in place for seven years — as a pretext to spark strife.

Observatory head Rami Abdul Rahman said that after reaching 18, young men were required to perform around one year of military service.